The burrito roller did it again, soaring after earning despite what some analysts initially believed to be a disappointing report.

A funny thing happened when Chipotle Mexican Grill (CMG -2.63%) released second-quarter earnings last week. As soon as the press release came out, the stock tumbled more than 7%. However, during the earnings call it climbed back to neutral, and by regular trading Wednesday the stock was trading a full 7% higher than its closing price on Tuesday.

What happened? Did Chipotle announce a new product breakthrough, another chain of restaurants, or accelerated store openings? Nothing of the sort, actually -- but the shift in investor sentiment illustrates what makes Chipotle such a special company. Let's review:

A lukewarm quarter
The market was right to sell off Chipotle following the earnings release -- this was far from a stellar quarter. Comparable sales growth (a closely watched metric) and overall sales growth were both weaker than expected. Same-stores sales improved just 4.3% in the quarter, below estimates of 5.8%, while overall revenue was up just 14.1%, about its weakest clip in five years. 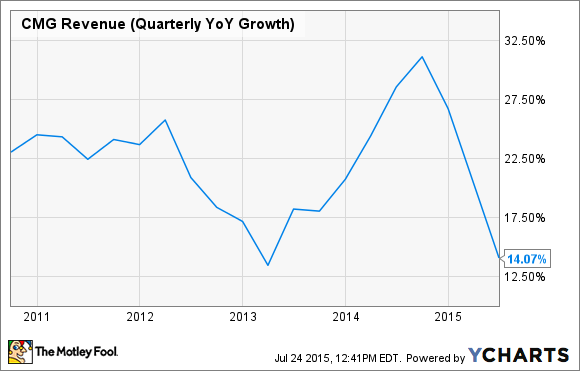 Management had warned that comparable sales would slide this year as it lapped last year's blowout performance, but what was most concerning was that the 4.3% gain was a result of price increases, and that traffic actually slipped slightly in the quarter, which is normally a warning sign.

On the plus side, earnings per share jumped 27% to $4.45 as the company gained sales leverage from the price increases.

Why the stock bounced back
There were several catalysts that seemed to drive Chipotle's recovery on Wednesday, and they all seemed to point to the stock's resilience.

First, the company continued to demonstrate its pricing power in a number of ways. The burrito chain has begun raising prices on its beef-based entrees by about $0.30 on each item to compensate for higher beef costs, adding 60 basis points in sales. CFO Jack Hartung said on the call that he's seen little resistance to those price increases. Importantly, Chipotle has yet to implement those increases in the 40% of restaurants that are still lacking carnitas due to problems with a pork supplier. The expected return of pork by the end of this year should boost sales both by allowing the price increase in beef and by bringing back customers who prefer carnitas.

Hartung also noted that the company had raised prices in the San Francisco area due to higher minimum wages and operating costs there and had seen little pushback from customers.

In addition to the tailwinds from the return of carnitas and higher prices for steak and barbacoa, management was also bullish on its international prospects, saying that it now considers Canada a proven market, and plans to ramp up its expansion north of the border. In the UK, meanwhile, Chipotle opened its seventh restaurant, which in its first week had already beaten the burrito chain's throughput record in that country, a sign of improving performance in Britain.

Chipotle is also experimenting with a chorizo entree in Kansas City, and its seed concepts, ShopHouse Southeast Asian Kitchen and Pizzeria Locale, continue to move along, with more openings scheduled for the second half of the year.

Hartung noted that July comps were tracking in the single digits, but traffic was positive, which seemed to please analysts after such a strong third quarter last year.

With 2014's price increase now fully lapped, the company should only see modest sales growth in the second half of the year. But the fast casual chain is strong enough to generate 27% profit growth even in a weak quarter. No company can be expected to crush estimates every quarter, but Chipotle is executing on its growth plan, on track to hit 2,000 restaurants by the end of the year. It continues to demonstrate pricing power, and profits should improve with the reintroduction of carnitas and the price increase on beef entrees. That's enough of a reason for Chipotle's stock to keep pace with its earnings.