Talk about a crazy week. On July 24, Republic Airways (NASDAQ: RJET) reported dreadful preliminary results for Q2, pulled its 2015 guidance, and warned investors about an ongoing pilot shortage and labor dispute with its pilots. Since then, the stock has been a hot potato.

Each day last week, Republic Airways shares moved by at least 9% -- including two moves of more than 50% (one up and one down). By the end of the week, the stock had lost 41%. Still, that was better than where things stood on Tuesday, when the stock at one point had accumulated a 64% loss for the week. 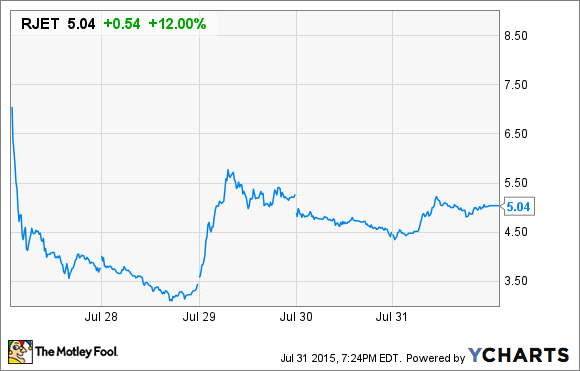 Did Mr. Market overreact to Republic Airways' announcement? Or is this stock a falling knife for investors to avoid? Let's take a look.

The pilot shortage hits Republic Airways
The U.S. aviation industry is currently facing a pilot shortage. Regional airlines like Republic Airways have traditionally had the lowest pay in the industry so, naturally, they have been the hardest hit. Due to tightened requirements for eligibility to become a commercial airline pilot, regional airlines are finding fewer good candidates than ever, while attrition rates are rising.

Republic Airways has been stuck in a dogfight with its pilot union as the two sides try to hammer out a new contract. Republic has offered its pilots industry-leading pay. But that's not saying much in the regional airline industry, where pilots typically start with annual pay of less than $25,000 and can still be earning less than $40,000 until they are promoted to captain.

The pilots want to be paid more in line with their mainline peers. Not surprisingly, Republic Airways argues that this is unrealistic and would prevent the company from being profitable.

Unfortunately, collective bargaining rules prevent Republic Airways from increasing pilot pay at all without a new contract. Without increasing pay, particularly for junior pilots, Republic will continue to have trouble recruiting enough pilots.

Additionally, Republic has seen a higher-than-usual number of pilots calling in sick this year. Meanwhile, the union has encouraged pilots not to volunteer to work on their off days. The result has been a huge uptick in flight cancellations, forcing Republic to cut back its schedule again and again.

Legacy carriers are willing to pay significantly more per hour for the larger regional jets that Republic flies compared to 50-seat jets. In theory at least, this should allow Republic to pay its pilots more than most of its competitors.

Furthermore, Republic Airways shares are currently trading at a significant discount to book value. That means that if Republic can ever get its operations back on track, the stock should be able to rise significantly from its recent level around $5.

No guarantee of survival
However, neither Republic's favorable fleet mix nor its relatively good balance sheet guarantees that it will survive. Since mainline carriers are constantly hiring pilots (mainly to replace retiring pilots), Republic's pilots know that they probably will be able to leave if the company doesn't meet their demands. This means they don't have much incentive to compromise.

That leaves management in a Catch-22 situation. If it doesn't give in to the pilots' demands, its crew shortage will get worse and worse, reducing aircraft productivity and eventually causing severe losses.

On the other hand, if Republic does meet the pilots' salary demands, it will be left with an uncompetitive cost structure -- also leading to severe losses. This could quickly destroy the company's book value, making Republic Airways a potential value trap.

Indeed, because Republic's business consists of flying for the legacy carriers under long-term contracts, it is in particularly dire straits. The contracts essentially lock the company into a certain amount of revenue that only rises gradually with inflation. There's not much flexibility to offset a big cost increase.

Many industry insiders seem to think that cooler heads will eventually prevail, allowing Republic Airways to reach a new pilot contract at long last. I think that's the most likely outcome, too. Nevertheless, until there's more clarity about a resolution to this standoff, Republic Airways stock is far too risky for most investors.