When I first uncovered bioprocess supplier Repligen (NASDAQ:RGEN) in October 2013, the company had a market cap of roughly $330 million and was sitting at just over $10 per share. The business was in good shape, at the doorstep of product growth, and still being viewed as a traditional biotech company -- with lengthy, expensive, and risky clinical trials -- by Mr. Market. The company actually supplies critical components to companies making biological drugs, which insulates it from binary outcomes in clinical trials and allows it to grow with the entire biotech industry.

While I liked the company then, I only recommended putting it on your watchlist. Oops.

Fast-forward to today, in the midst of the greatest biotech boom in market history, and Repligen sports a market cap over $1.1 billion and sits at $35 per share. While shares have recently fallen from all-time highs of $42.50, the company is having no trouble crushing the market. After its 240% gain since October 2013, is Repligen stock still a buy?

By the numbers
Investors who value the fundamentals likely wouldn't touch Repligen with a 50-foot pole. By almost every metric, the company is excessively valued. The price-to-earnings ratio is a staggering 175 for the trailing 12-month period, which drops to only 105 on a forward basis using future earnings estimates. Overvaluation is most evident when you evaluate the company's price-to-sales ratio compared to those of its closest peers, Bio-Techne, Thermo Fisher Scientific, and Bio-Rad Laboratories. While Repligen is the smallest and fastest-growing company in its peer group, it also sports the highest P/S ratio. 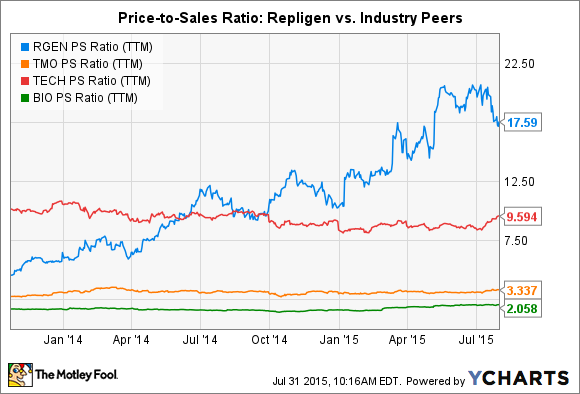 As you can see in the chart above, this wasn't the case in October 2013, when the company tracked its peers more closely. So how quickly is Repligen growing? And does its growth justify its valuation?

Is Mr. Market being over-optimistic?
Management is guiding for some impressive growth in 2015 compared to 2014 thanks to increased demand for its bioprocess products and the launch of newly acquired products. Better yet, the numbers were revised higher after a strong first quarter -- always a good sign.

Given that Repligen will generate less than $80 million in revenue for all of 2015, Mr. Market is clearly factoring future growth into the company's $1.1 billion market cap. Can the company keep growing at a respectable clip for years into the future?

Right now, Mr. Market is giving the company the benefit of the doubt. The business is comfortably profitable, the balance sheet is squeaky-clean, and management hasn't been shy about pulling the trigger to make strategic acquisitions in order to fuel growth. In fact, every product portfolio at Repligen has been acquired or expanded through acquisitions.

In addition to the possibility of future acquisitions, Repligen plays in some pretty big markets. The bioprocess consumables market currently exceeds $3 billion annually, and it grows every time a monoclonal antibody drug is approved by a regulatory agency. The ability to piggyback a quickly growing biopharmaceutical market bodes well for Repligen's long-term prospects. But even if revenue grows at a 15% clip for the next five years, starting from the high end of 2015 guidance, total revenue will only reach $156 million at the end of 2020. That seems to imply that a good amount of future growth is already factored into the share price.

What does it mean for investors?
It's easy to appreciate the growth story at Repligen. The only question I would raise is this: How much of the company's recent gains can be explained by the ongoing biotech boom? Put another way, if the biotech boom ends, how will that affect the company's share price? It's impossible to say.

My advice would be this: If you consider Repligen stock a buy and like the long-term opportunities, then adopt a long-term mindset. Don't bet the farm all at once. Instead, gradually add to your position over time. And if shares do fall considerably when the biotech boom loses steam, consider investing a larger amount to further lower your entry points and maximize your long-term gains.