A market sell-off in the past few weeks has beaten down many growth and tech stocks. While stock valuations do occasionally get ahead of themselves and can benefit from a correction, not every stock that gets sold off during these pullbacks was necessarily overvalued in the first place. For instance, Apple (NASDAQ:AAPL) stock should have been exempt from this dip. After all, the stock was already on sale. Even so, shares are trading lower, presenting a buying opportunity.

With shares down about 12% in the past few weeks, it's looking like a great time to pick up some Apple shares.

Why are Apple shares trading lower?

The most frequently cited reasons for this particular sell-off of growth and tech stocks have been speculation of a possible decision by the Fed to raise interest rates and China's recent devaluation of its currency.

Regarding Apple specifically, the motivation for the sell-off seemed to be the devaluation of China's currency. The Wall Street Journal's story on Tuesday had the headline "Devalued Yuan Set to Take Bite Out of Apple, Give Boost to Chinese Rivals." The authors, Lorraine Luk and Eva Dou, went as far as to say that Apple could "be one of the biggest losers from China's surprise decision to devalue its currency."

Foreign companies such as Apple and fast-food retailer Yum Brands rely heavily on sales in the world's second-largest economy. For them, a weaker yuan means less revenue when the currency is converted back into U.S. dollars. Chinese manufacturers, on the other hand, such as Apple product assembler Foxconn and PC maker Lenovo Group Ltd., will get a lift from cheaper production costs at home, while their sales are mostly made in dollars.

During the past several weeks, Apple stock has fallen about 12%. About 5% of this decline occurred after WSJ reported this pessimistic view for Apple in China.

Is the sell-off merited?
Not at all.

First of all, Apple stock isn't even priced for meaningful growth. Indeed, Apple's conservative valuation essentially prices in considerable deceleration in EPS growth rates. So, even if Apple's business did slow, it's not likely to slow enough to justify an even cheaper Apple stock.

Trading at just 13.3 times earnings, Apple is priced to deliver modest, low-single-digit EPS growth over the next five to 10 years. Indeed, a conservative discounted cash flow valuation based on expectations for low-single-digit annualized growth in Apple's free cash flow over the long haul suggests Apple stock could be worth around $165 today. If this is the case, the stock is trading at about a 40% discount to a reasonable estimate of its fair value.

But should Apple be trading so conservatively? The company has shown recently that, despite its already enormous top and bottom lines, it is still capable of delivering incredible growth. 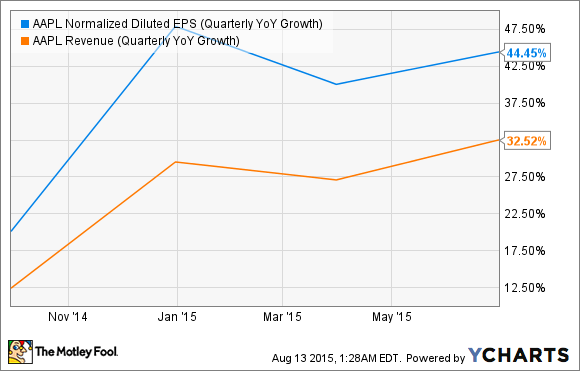 Consider Apple's most recent quarter. Revenue soared to a new third-quarter record, hitting $49.6 billion -- up significantly from its previous third-quarter record of $37.4 billion. Similarly, EPS jumped to $1.85 per share compared to $1.28 in the year-ago quarter.

Furthermore, even a slowdown in Apple's China's business would still likely represent considerable growth. Revenue in Apple's Greater China segment, which includes China, Hong Kong, and Taiwan, soared 112%, year over year. Or here's another way to look at it: While overall smartphone sales in Greater China were up about 5% year over year in Q3, Apple's iPhone unit sales, which serve as the key driver behind the majority of the tech giant's profits, soared 87% in Greater China compared to the year-ago quarter.

So, have investors overreacted and, as a result, oversold Apple stock? It certainly seems so. It looks like a great time to load up on an excellent company at a bargain price.