AT&T (NYSE:T) remains the last wireless carrier clinging to the idea of two-year contracts and it's using a version of that strategy with its newly purchased satellite TV brand.

In these deals, customers get a hot, new phone at a discounted price paying more for service over a 24-month period to reimburse the company for the "discount." AT&T is mostly sticking with that model as it begins offering bundles that include service from its recently acquired DirecTV brand.

It's not exactly the same since there is no top-tier phone in the mix, but the company's promoted deals for new customers joining the satellite TV service involve a two-year commitment. Whether you want just pay TV or a bundle with phones included, AT&T wants users to sign a contract that keeps them around for 24 months.

Other companies may have abandoned this strategy, but AT&T looks to be doubling down and betting that the promise of paying less -- at least for a while -- will get people to sign on the dotted line.

What is AT&T doing?
While wireless contracts were built around customers getting access to top-tier smartphones at subsidized prices, the game is a little different when selling satellite TV. Since there is no hot satellite dish that people see as a status symbol, a subsidy won't work as a way to entice people to sign a two-year contract. 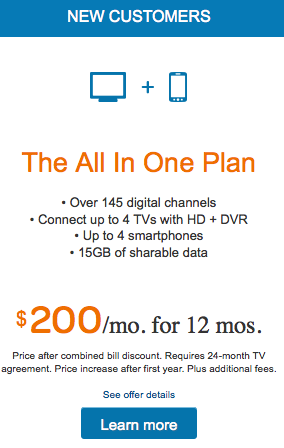 Instead AT&T is using a similar tactic, the teaser rate.

In this scenario the company advertises a low price for the first 12 months. The catch is that the deal is for 24 months and the price skyrockets in the second year. For example, the company's "All In One" plan comes with over 145 digital channels, up to four TVs with DVR, up to four smartphones, and 15GB of shareable data for $200 a month.

The $200 number during the promotional period is in itself a little bit misleading. It does not include any actual phones (you have to buy or finance them) nor does it account for a number of little fees (which is typical for the phone and pay TV industries). It's also impossible to determine what the cost for the package will be in the second year as AT&T only says that it will charge the "then-prevailing" price for TV service.

It does admit that the cost will go up and it provides roughly a page of hard-to-decipher tiny-type disclaimer text explaining how things work in terms that are less than clear.

This type of offer is also how the company sells stand-alone satellite TV service. In this case though since the lack of a bundle makes the offer less complex it appears the initial $50 rate for its "Select" package jumps to $85 after the promotional year. The top-tier "Ultimate" package offers a $75-a-month teaser rate jumping to $122 in the second year.

Using teaser rates is confusing if not intentionally deceptive and it's surprising that AT&T insists on keeping up the practice.

It's time for a change
It's worth noting that DirecTV used teaser rates and two-year deals before AT&T purchased it. It's possible to secure service without making a two-year deal, but the company makes that unpleasant with setup charges, equipment deposits, and other tactics which make it unlikely anyone would even try to avoid a two-year deal.

Essentially AT&T is betting that customers will look at the teaser rate and not be able to imagine that someday tomorrow will come. That's always been a safe bet with American consumers, but the changing wireless phone industry suggests that people may be becoming more savvy.

It would make more sense for AT&T to just offer a good price with a discount on the monthly rate in exchange for customers committing for 24 months. If you pay $50 a month for the first year and $100 a month for the second, you're paying an aggregate monthly fee of $75 and the company should just charge you that.

AT&T isn't doing anything other than what it has always done, but perhaps the public has gotten to the point where it will reject it. There are other choices for pay TV in most cases and consumers may not be blinded by short-term deals anymore.