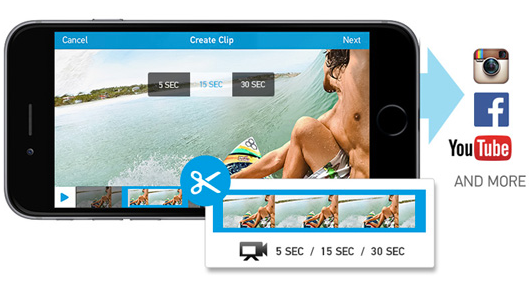 And why should it? Compared to the subsequent fallout of a "disappointing" third-quarter outlook from Ambarella -- which counts GoPro as its single largest customer -- a simple app update seems insignificant. So, it's hard to blame investors for focusing primarily on whether the video chip supplier's guidance portends weakness for the action-camera maker.

However, I've already argued that's not the case. After all, Ambarella didn't place the blame for its light outlook on actual demand for its chips, but rather on GoPro's decision to time the respective launches of its new HERO4 Session and HERO+ LCD cameras to be in the second quarter, instead of in Q3 as usual.

GoPro's end game
To be fair, the new app isn't entirely surprising: GoPro management promised investors during last quarter's conference call it would be released before the end of the summer. But even so, I think the market is underestimating the importance of the new software features included in the update, which most notably allow users to easily create and share short video clips either directly on their camera or a mobile device without requiring a complete download of the full video.

So, why is this important? For perspective, recall GoPro reclassified itself as a "media" company prior to its IPO last year, effectively enabling it to command a higher valuation than it otherwise would have as a hardware-only business. Though some analysts viewed the move as questionable given the fact most of GoPro's revenue comes from cameras and associated accessories, transitioning into a media empire over the long term remains a top priority for GoPro.

Investors should also keep in mind in July, GoPro revealed a key piece of the puzzle to monetize its media with the GoPro Licensing Portal, which is aimed at helping professionals seamlessly search, sort, and request likeness rights and copyrights from its large library of premium content.

In addition, the more GoPro content hits the Web, the more likely consumers are to continue bolstering GoPro's core hardware segment. As GoPro founder and CEO Nick Woodman put it, every new piece of content that hits the Web "represents a powerful promotional engine driving our virtuous cycle, creating awareness and demand for our products."

Entertaining the masses
This is also why GoPro regularly updates investors during each quarterly call with progress on its social-media channels and media-sharing efforts.

Last quarter, for example, GoPro's YouTube subscriber base had growth 40% year over year to 3.1 million. In Q1, GoPro also revealed videos published to its YouTube channel were up 93% from the same year-ago period. On Instagram, GoPro stood tall as the fourth most engaging brand at 5.8 million subscribers, up 23% sequentially and 140% year over year. On Facebook, GoPro's followers rose 16% year over year to 8.8 million, driving 40 million views in the three-month period. And by the midpoint of 2015, GoPro had already doubled its number of hashtag GoPro mentions year over year to 45,000 per day.

So, in the end, while releasing a simple app update to encourage easier sharing of content might seem unexciting at first, it becomes much more compelling when you consider the ramifications of doing so with such a massive, fast-growing audience in mind.