A new hire and insider buying helped give investors confidence.

What: Shares of Sears Holding Corporation (SHLDQ) surged 24% last month, according to data from S&P Capital IQ. As the chart below shows, it was a characteristically volatile month for the rocky stock, as investors bid up shares of the retailer after it hit a multiyear low at the beginning of August. 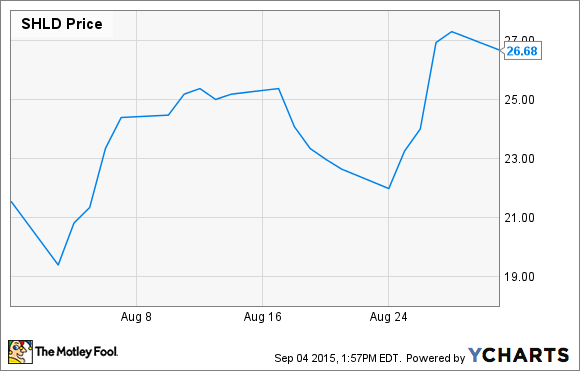 So what: To kick off the month, Sears shares promptly fell 10% as the company said in a pre-earnings announcement that it would post its first quarterly profit in several years. That profit was due to income from spinning off property into a REIT and not from any operational turnaround that the company had undergone.  The market instead paid attention to reports that same-store sales fell 10.6% companywide, continuing a long decline.

As Sears' stock fell to below $20, the company got a boost from Moody's, which upgraded its outlook on Sears from negative to stable, reflecting the retailer's improved cash position from the REIT spinoff.

Sears got another burst of good news toward the end of the month on insider buying from CEO Eddie Lampert and reports of a new key hire in its hardlines division. Lynn Pendergrass will oversee many of the company's most prized brands such as Kenmore appliances, DieHard batteries, and Craftsman tools. Some analysts saw the move as an indication that Sears would seek to promote those brands outside of its own stores, based on Pendergrass's past experience. Considering Sears and Kmart's own struggles, that might the best avenue to generate increased sales from those brands.

Now what: Though it seems like every piece of good news sends Sears shares soaring, investors have to view last month's gains within a wider context. The stock is still down nearly 20% since the beginning of the year, and its operational challenges seem all but impossible to overcome. Investors have long insisted that the stock is an asset play, but many of those properties have already been sold or spun off. Perhaps there's more value left in brands like Kenmore and Craftsman, but Sears' stores burn more cash every quarter. It's hard to see how any potential asset sales or spinoffs make this an appealing investing opportunity.