Amgen shares took it on the chin in August following a shift in market sentiment and the approval of Repatha. Is this dip an opportunity to buy this biotech blue chip at a discount, or a warning to keep your distance? 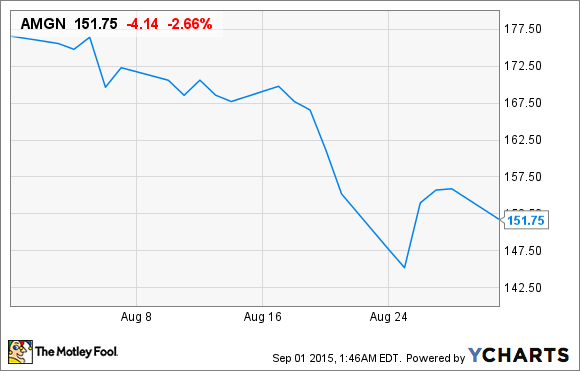 The biggest drag for Amgen last month was rapidly changing investor sentiment that resulted in a quick correction in the broader market. This was a problem for Amgen for two particular reasons. First, the biotechnology sector is arguably trading at one of highest premiums of any sector, meaning it could also be one of the hardest-hit during a correction.

Secondly, Amgen's stock price has tripled over a four-year period in anticipation of numerous catalysts, including its six recent drug approvals with the Food and Drug Administration and ongoing phase 3 studies. The implication is that investors may have already priced these catalysts into Amgen's stock price, leaving little room for upside but plenty of room for downside.

Also working against Amgen was the announcement from the FDA that LDL-cholesterol lowering drug Repatha received a similar label indication to Regeneron Pharmaceuticals and Sanofi's PCSK9 inhibitor, Praluent. The approval isn't all that surprising, but investors had hoped for a broader indication. Additionally, Repatha's $14,100 annual cost, along with Praluent's $14,600 cost, could backfire with pharmacy-benefit managers and insurers angling to exclude these therapies from their list of approved drugs or use them only in rare instances. The question investors need to ask here is whether Amgen represents a bargain at these levels, or whether it should be avoided.

In my opinion, given that Amgen has gotten six therapies approved over the past year, and not a single one of its 10 late-stage products has failed to hit the mark in clinical studies, Amgen appears to be a better value than most investors realize. It's possible that investors have already factored in Amgen's half-dozen FDA approvals, but that still doesn't account for the top-tier performance of Amgen's mature products, such as Neulasta and Enbrel, which are both delivering substantial growth and are the primary reason Amgen recently boosted its full-year guidance.

Looking ahead, Amgen appears capable of growing its EPS by roughly 10% per year over the next five years. With a forward P/E of 14 and a reasonable PEG ratio of 1.4, Amgen could still have plenty of gas left in the tank.