Learn three reasons investors should avoid CARBO Ceramics in favor of its competitors, even if oil prices recover.

It's no secret that the oil crash has been brutal on proppant suppliers such as CARBO Ceramics (CRR) with shares for Carbo and most of its peers plunging 70% or more in the past year alone. 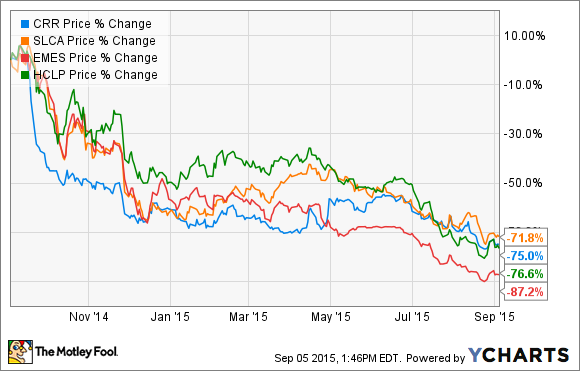 However, there are three reasons I think investors should consider avoiding CARBO Ceramics compared to its frac sand peers-- whose business model, in my opinion, is quickly losing relevance compared with its peers -- even with shares trading at their lowest levels in almost 12 years.

In fact, based on CARBO's business model, I'm convinced that the company will grow much slower than its competitors, even if oil recovers sharply in the years to come.

CARBO's products are world class, but ...
CARBO sells high-tech proppant solutions to oil and gas producers that can greatly increase the production of their wells and thus lower their overall per-barrel-equivalent production costs.

For example, its flagship Kryptosphere HD ceramic proppant -- designed to withstand extreme pressures found in very deep oil wells such as those used in offshore drilling -- is able to prop open cracks in shale at pressures of 30,000 PSI. As a point of comparison, traditional frac sand crushes at between 1,000 and 7,000 PSI, while resin-coated sand can manage only up to 12,000 PSI.

Even among ceramic proppants, CARBO has an edge, because at 20,000 PSI Kryptosphere, HD offers four times better oil and gas flow conductivity than the lower-cost ceramic products from its competitors -- mostly Chinese and Brazilian producers.

However, as bleeding edge as CARBO's technology is, there's just one major flaw that threatens to stymie its big growth plans, no matter what price oil trades at.

As this table of CARBO's product sales illustrates, its advanced ceramics have been losing market share to regular boring old frac sand. In its last quarter, regular frac sand made up 56% of CARBO's proppant sales volume -- which has been the case for several years now even when oil was around $100 per barrel. That's not a surprise, considering that sand is so much cheaper than competing proppant technology -- 5 and 10 times cheaper than resin coated sand and ceramics, respectively.

Then there's the fact that most U.S. shale drilling simply isn't done at the kind of extreme depths that require such advanced proppants. Except for some very deep wells in the Eagle Ford and Haynesville Shale, most U.S. oil and gas fracking occurs at pressures that allow for the use of much cheaper frac sand. 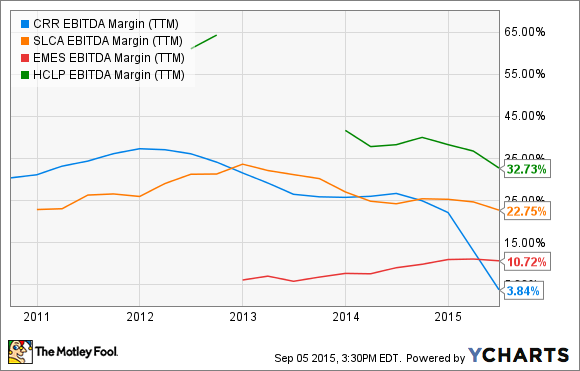 CARBO's EBITDA margin has been in decline since 2012, and the oil crash has decimated its margins far worse than its competitors, such as US Silica, Emerge Energy, and Hi-Crush Partners, have seen. Those companies are focused on sales of lower-cost sand.

In fact, in its last quarter, sales volumes of CARBO's high-margin ceramics and resin-coated sand plunged 58% and 77% year over year, respectively, compared with just a 5% reduction in sand volume.

My concern is that, even when oil prices recover, CARBO's higher-margin products will fail to gain market share, especially since ceramics are much harder to scale than sand.

Ceramics production capacity is harder to increase
Ceramic proppants are generally made in a factory through a process that's more expensive and harder to grow quickly compared with sand.

That means that as demand for proppants has exploded in recent years, CARBO's ceramic products have faced falling market share not only because of their higher costs, but also because the company hasn't been able to build out its capacity fast enough. 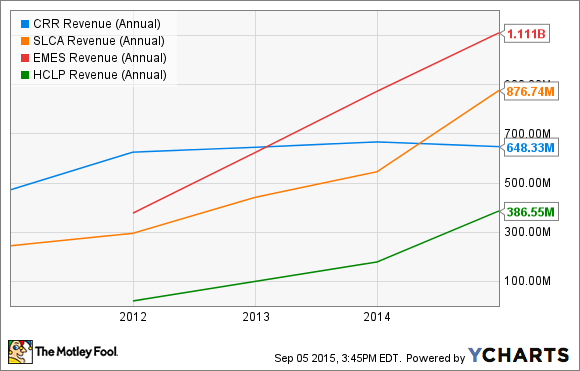 As CARBO's sales volumes have had to shift more toward lower-cost frac sand, its sales have stalled -- even before the oil crash -- while those of its competitors have exploded as they brought new sand mines online.

The simple fact is that, when it comes to frac sand, CARBO is a very weak player, with neither the sand reserves nor the transportation logistics capacity to compete with its far larger competitors. For instance, this past quarter its sand sales were as follows:

Takeaway: CARBO's business model is inferior
In my opinion, ceramic proppants will remain a niche market that will become increasingly dominated by far cheaper frac sand except for the minority of oil wells where pressure conditions are extreme enough to justify the much higher cost. While CARBO may very well survive the oil crash, I think that long-term growth investors will ultimately do better buying CARBO's commodity sand-focused competitors; many which pay generous dividend yields while you wait for the industry to recover.