Please ensure Javascript is enabled for purposes of website accessibility
Log In Help Join The Motley Fool
Free Article Join Over 1 Million Premium Members And Get More In-Depth Stock Guidance and Research
By Timothy Green - Sep 15, 2015 at 11:00AM

Both retailers have record dividend yields thanks to slumping stock prices, but one is better than the other.

Wal-Mart (WMT 1.97%), the world's largest retailer by sales, and Kohl's (KSS -3.06%), a discount department store, have one thing in common: The stocks of both companies have plummeted so far this year. Shares of Wal-Mart are down nearly 25% since the beginning of 2015, while Kohl's stock is down 17% year to date, and 35% since April 1. 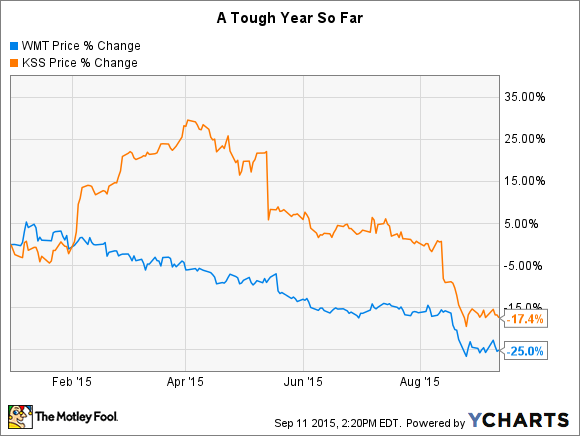 These slumping stock prices have transformed both Wal-Mart and Kohl's into interesting dividend opportunities. Wal-Mart currently sports a dividend yield of just more than 3%, the highest in the company's decades-long history of paying dividends. Kohl's, which only began paying a dividend in 2011, now has a dividend yield in excess of 3.4%. 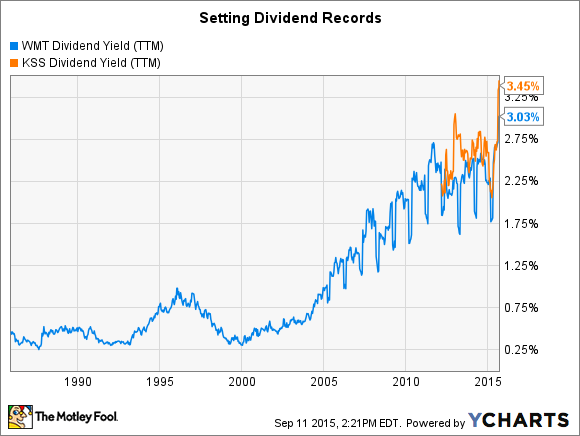 Both companies are facing their fair share of issues, driving their stock prices down, and their dividend yields up. But which stock is the better dividend buy?

Of course, these rates of growth may not continue into the future. Wal-Mart's most recent dividend increase hiked the quarterly payment by a measly 2.1%, while Kohl's managed a dividend increase of 15.4%, right in line with its historical rate.

Earnings growth will determine dividend growth going forward, and both companies are currently struggling in that department; but another factor is the payout ratio, or what percentage of earnings goes toward paying the dividend. For both companies, that ratio has been rising over the years. 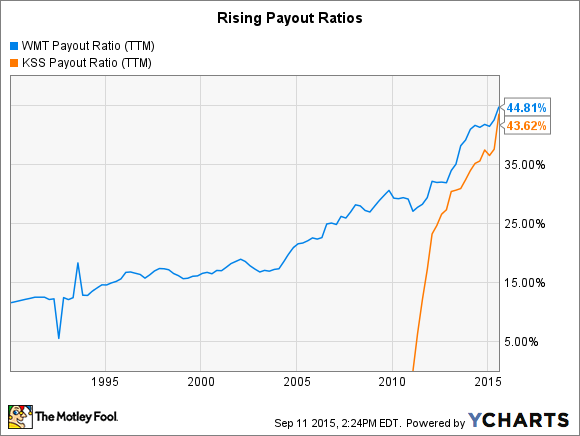 A payout ratio in the mid-40s isn't all that high, but both Kohl's and Wal-Mart have been suffering from declining net incomes. For Kohl's, net income peaked in 2011, and has been falling ever since. While share buybacks have helped boost per-share numbers, during the past 12 months, Kohl's has produced the lowest level of net income in a decade.

Wal-Mart's profitability decline hasn't been so severe, with profits down modestly since 2012; but higher labor costs and increased investments in e-commerce led Wal-Mart to guide for an earnings decline for the full year. Even without dividend increases from either company, the payout ratios will be rising due to lower earnings.

What this means is that investors shouldn't expect particularly fast dividend growth from either company until earnings start growing again. There's plenty of room left to grow the dividends in both cases, but the last thing either company wants to do is raise the dividend too quickly only to later be forced to cut it.

Which is the better dividend stock?
Even though Kohl's has a higher dividend yield, I think Wal-Mart is the superior dividend stock. Kohl's has a lower cost structure compared to its direct competitors, giving it an important edge, but it doesn't have the kind of durable competitive advantage that Wal-Mart enjoys. Wal-Mart's dividend is far safer for that reason.

Wal-Mart's dividend growth will probably be slow for a while; but if its investments in higher wages and e-commerce pay off down the line, more robust dividend growth will likely follow. The dividend yield is as high as it's ever been, and for investors who believe in the long-term story, now is the time to buy.

Kohl's dividend is less safe, and the company is struggling with deeper profitability issues than Wal-Mart. Kohl's is very much a turnaround story, and it's probably not the kind of stock that should go into a dividend portfolio, where dividend safety is the most important factor.

Both Wal-Mart and Kohl's have seen their dividend yields surge to record highs this year. But Wal-Mart is the clear winner in the battle of the dividends.