Companhia Energetica Minas Gerais (ADR) (CIG -1.39%), CEMIG, is one of the largest power companies in Brazil as it distributes 12% of the country's power. However, that's not its main draw for American investors. Instead, what catches investors' attention is the company's generous dividend yield, which at the moment is well over 5%. However, before plunging in head first to grab that dividend by investing in CIG stock, there are a few things investors need to know.

CEMIG 101
CEMIG is Brazil's largest electric distribution company, as well as the third largest generation company and third largest transmission company. Its power is generated via 105 power plants, 78 of which are hydroelectric. In addition to that, the company also has roughly 9,500 miles of transmission lines and over half a million miles of lines in its distribution network. As the slide below shows, those assets are spread around much of Brazil with further diversification in Chile. 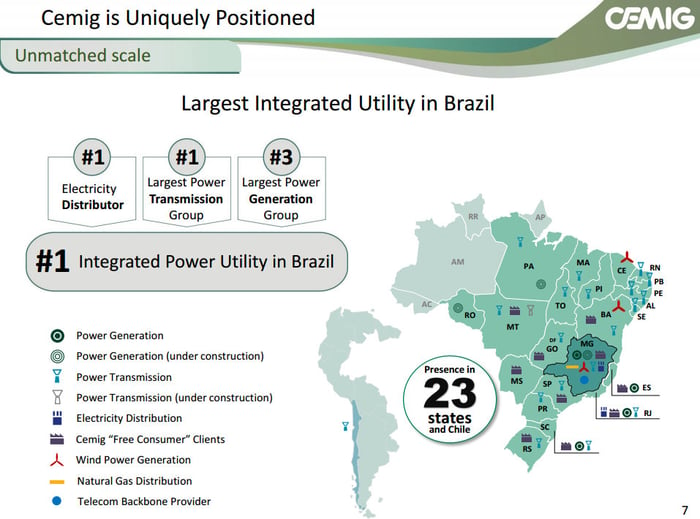 That diversified portfolio provides the company with a lot of stability as its net income has steadily grown over the past five years. In 2011 the company earned R$2,415, while over the past twelve months it has earned R$2,930. That stability has enabled the company to continue to invest in growth projects while also paying out that very compelling dividend yield.

Two red flags
Speaking of the company's dividend, that could be a cause of concern for some investors. First of all, CEMIG's dividend isn't a fixed dividend like the ones paid by most U.S. companies. For starters, it can fluctuate with foreign currency movements. In addition to that the company's dividend policy calls for a minimum dividend that is 50% of net profit from the previous year as well as extraordinary dividends potentially being paid in alternate years. This leads to a lot of fluctuation each year. Further, the company has a maintained a high current payout ratio, which we can see on the following slide. 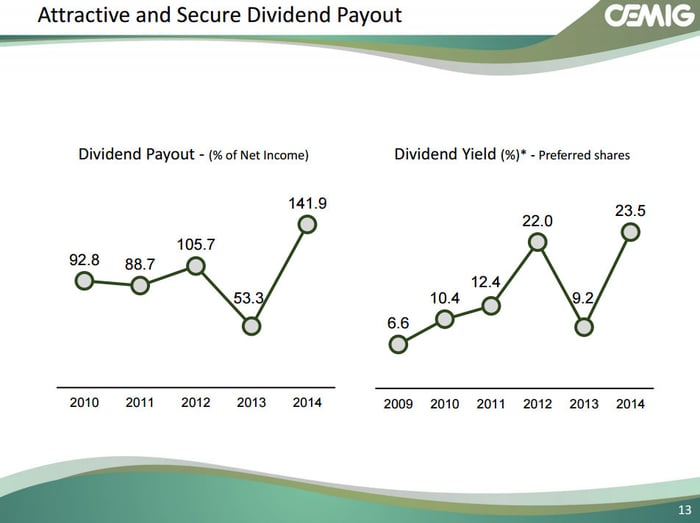 As the chart on the left side shows, at times the company is paying out more than 100% of its current year's income due to its dividend policy. While its stable assets and cash flow help to mitigate some of risk in paying out such a large portion of its net income, it means the company needs to rely on the capital markets to fund growth.

The other issue to consider is the fact that this is a Brazilian company, which adds a lot of volatility and risk. For example, this year Brazil's economy is expected to contract by 2.26% as its economy is very reliant on commodities such as iron ore and oil, which are both experiencing pricing weakness this year. This economic weakness impacts demand for electricity in the country and therefore impacts CEMIG's results. Further, the economic weakness also leads to some foreign currency issues with U.S. investors as the strong dollar makes CEMIG's results look weaker, which impacts its value. That's one reason why CIG's stock has been decimated over the past year. 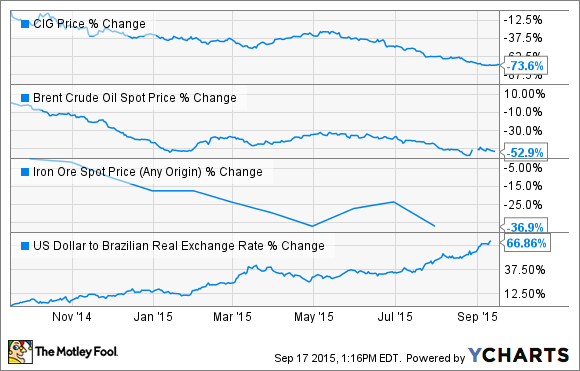 Brookfield Renewable Partners has a lot of the renewable energy characteristics of CEMIG as it operates one of the largest pure-play renewable power platforms in the world as it owns 250 renewable assets in North America, Latin America, and Europe. Further, in sticking with the Brazil theme, Brookfield Renewable owns 41 hydropower facilities in Brazil along with 5 wind farms and 4 biomass plants. Meanwhile, it pays a much more stable distribution that's currently yielding 6%. So, it offers similar assets and a high yield without the issues of investing in a Brazilian company.

Brookfield Infrastructure Partners, on the other hand, is much more diversified both globally and by asset class. The company owns utilities, transportation assets, energy assets, and communication infrastructure around the globe. The company even has a strong presence in Brazil, owning thousands of miles of rail and toll roads in the country as well as the leading power distribution system in Chile. Those assets provide very stable cash flows, which Brookfield Infrastructure pays out via a solid 5.5% distribution. Again, similar assets, geographic exposure, and dividend, but without the country specific risks.

Investor takeaway
CEMIG is a strong company as it is the leading power company in Brazil. However, it's dividend is variable and investing directly in Brazil carries a lot of risk, which is why CIG's stock has been hammered over the past year. There are simply better options with either Brookfield Renewable or Brookfield Infrastructure being strong choices due to similar profiles with less risk.