Please ensure Javascript is enabled for purposes of website accessibility
Free Article Join Over 1 Million Premium Members And Get More In-Depth Stock Guidance and Research
By Reuben Gregg Brewer - Sep 26, 2015 at 9:15AM

It's hard to love a commodity business these days, which is why this aluminum giant is shifting away from that space

When you think of aluminum, the first name that should come to mind is Alcoa Inc (NYSE: AA), also known as the Aluminum Company of America. A more than 125-year history in the market is one reason for this, but so are the company's recent moves to change itself from a purveyor of commodities to a specialty products company. And that's one of the main reasons why this is, perhaps, the best aluminum stock around.

Commodities
So let's be up front: Commodity prices have been weak, and that includes aluminum. As China's economy grew in the double-digit range, company after company ramped up to provide the nation with the raw materials it needed to sate what appeared to be an ever-growing appetite. Only you can't project above-trend demand into the indefinite future. Now that China's growth has started to slow down, all the supply that was built up is swamping global demand. Prices have, predictably, cratered.

That's the world in which Alcoa lives. And it hasn't been pretty. After a disastrous 2013 during which the company lost more than $2.00 a share, it has been largely profitable, but not robustly so. In other words, Alcoa is surviving. But that's not a bad thing in a weak market, and is actually a statement to the company's longevity. It's been "here" before, and it's dealing with it. Moreover, commodity prices wax and wane over time, so Alcoa is also well aware that this, too, shall pass, to quote a famous proverb.

Change is in the air
However, what makes Alcoa so interesting is really how it's trying to reposition itself from providing commodity products to specialty ones. For example, soda cans. You know them; you love them. Life wouldn't be as pleasant without them, but it isn't a market in which you can add much value. That's why Alcoa has been shutting plants that sell into markets like this, and other areas in which it's competing mainly on price, not quality.

The Ford F-150, which uses aluminum to help reduce weight and increase gas mileage, is a very public example in the auto space. However, that isn't the only car or automaker that Alcoa is working with.

At the same time, it has been investing in areas where it can stand out from the pack, like the automotive and aerospace arenas. That's included home-brewed technology advances and acquisitions. The goal is to become an indispensable partner in key markets. 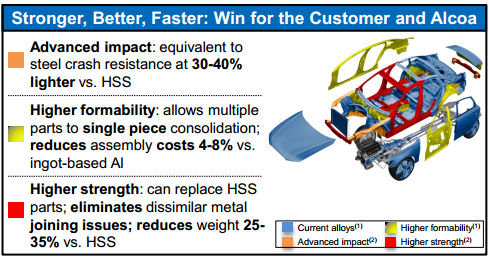 Cars are a big target for Alcoa. Source: Alcoa

It's a much bigger trend. The use of aluminum in cars is expected to continue to grow over time, displacing heavier steel because of emissions-reduction goals. Physics is a big part of this story, since lightweight aluminum parts help improve gas mileage. Aerospace is another sector that Alcoa is targeting, because high-quality and light weight are vital. Also, aerospace demand for aluminum is expected to grow relatively quickly in the years ahead.

How much faster? Transportation demand for aluminum is expected to grow three times as fast as demand in the packaging sector, according to Norsk Hydro, one of Aloca's major foreign competitors. No wonder Alcoa's ditching soda cans and retooling around transportation. 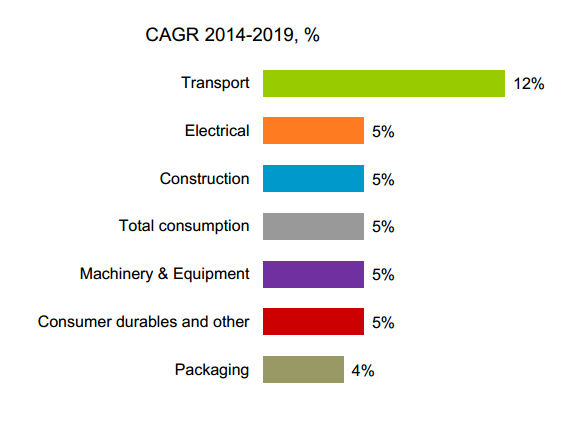 Transportation-demand growth will be huge for Aluminum, and that's backed up by competitors' estimates. Source: Norsk Hydro

It's about profits, too

Alcoa is shifting to where the demand is, but this move isn't just about growth. The products it's pinning its growth on are harder to make, and more technical in nature. Thus, it can charge higher prices. This is flowing through to the company's gross margins. In 2013, gross margin was around 13.5%. By 2014, the company had improved that metric to nearly 20%. A big part of that is getting into better businesses.

But this change is far from over -- which is why Alcoa is one of the best aluminum stocks around. It continues to streamline its commodity-like businesses to get the most bang for the buck. And at the same time, it's expanding in key growth areas, and taking on strategic acquisitions that will further bolster its positions in these targeted spaces.

If you're looking for an aluminum company because you see a big future for this lightweight and strong metal, Aloca is one of the best stocks for you to look at. It's already changed a lot, but there's more change to come. And that should help boost growth and profit margins.