What: Shares of Conn's (NASDAQ:CONN) tumbled 20% last month according to data from S&P Capital IQ. As you can see from the chart below, the stock slid gradually throughout the course of the month as an analyst downgrade and continuing questions about the company's business model pushed shares downward. 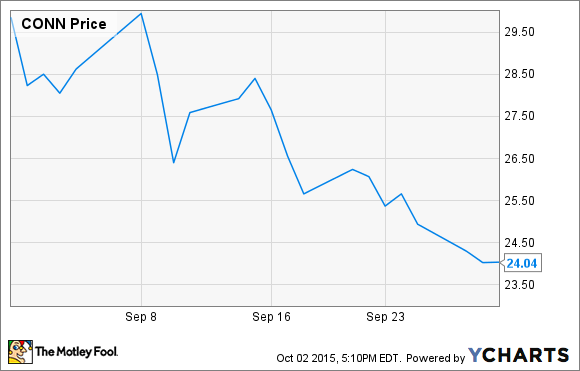 So what: Conn's worst stretch of the month started on September 15th when the stock fell 10% over a four-day period after a downgrade by Stifel Nicolaus due to continuing credit issues. Analyst John Baugh lowered his rating to hold from buy, citing concerns about increases in the company's average account balances and delinquencies. Unlike most retailers, Conn's provides financing to its customers to purchase durable goods like electronics, appliances and furniture at its stores. The company's performance is more dependent on the health of its credit business rather than its retail sales, according to Baugh, as sales can be juiced by loosening credit standards but ultimately the loans must be collected in order for the company to profit.

Now what: Conn's shares had already been pumped up more than 25 times their post-recession low at the end of 2013, but collapsed as it became clear that many of its loans would not be repaid, wiping out a quarter's worth of operating profit. Shares now trade for about a third of their 2013 peak.

It seems Baugh has brought up a valid concern, but it's one Conn's should be better prepared for following the recent crash. In its most recent quarter, its 60-day-plus delinquency rate ticked up from 8.7% to 9.2%, and while that trend bears attention, it's not a huge red flag for the company. Same-store sales growth has also slowed, which may be the result of the company's tightening its credit standards.

Since the stock collapsed, management has taken steps to shore up its credit profile as its customers' credit scores have steadily moved higher. That should offer some reassurance that Conn's days of playing fast and loose are over. With a forward P/E of just 9, the stock could be poised to climb again if management can delivery steady sales growth and keep loan losses in check.