Silver Wheaton isn't taking on the risk of running a mine, but it does take on risk.

Silver Wheaton Corp. (USA) (WPM 2.77%) has a unique business model within the precious metals industry. And even though the way it does business makes it less risky than a miner in some ways, it doesn't mean it's devoid of risk. A quick look at one big mistake will help make the point clear.

Streaming is the key
Silver Wheaton is what's known as a streaming company. Essentially, it provides financing for gold and silver miners. In return, it gets the right to purchase silver (roughly 60% of revenues) and gold (about 40%) at reduced prices. Currently, the company's silver costs are around $4 an ounce, and its gold costs are around $400 an ounce. Both are well below the currently subdued prices these metals are fetching in the spot market.

So, even during a tough time in the precious metals industry, Silver Wheaton is doing just fine, financially speaking. Part of that is because it doesn't own any mines -- it just provides cash in return for streaming rights. So it doesn't have to deal with the cost and risk of mining, it just collects its silver and gold.

What deals look like
There are generally two kinds of deals Silver Wheaton makes. One is for output from an existing mine, where precious metals might simply be a byproduct of another mining process, such as copper mining. For a copper miner looking to expand its business, a quick cash infusion might be more valuable than selling the gold and silver byproduct as it's mined. This is a relatively low-risk play for Silver Wheaton since it already has some idea of what to expect, and gold and silver will quickly start being sent the company's way.

The other type of deal Silver Wheaton makes is more like investing in a start-up. The streaming giant will often provide a miner with funds that get used to build a new mine, and it won't see any gold or silver until the mine starts producing.

Just like investing in tech start-ups, not all mines work out as planned. Silver Wheaton can do all of its homework and still wind up investing in a mine that doesn't pan out. And Pascua-Lama is a prime example. If you don't follow precious metals, you probably don't know that name, but it's something of an albatross for Barrick Gold Corporation (USA) (GOLD 1.24%).

Potential on hold
According to Silver Wheaton, "Pascua-Lama is forecast to be one of the largest and lowest cost gold mines in the world with an expected mine life in excess of 25 years." No wonder it was happy to provide $625 million in late 2009 to help Barrick pay for the project. The deal also included Silver Wheaton getting immediate silver from some of Barrick's other mines in Peru and Argentina. That's a win-win for Silver Wheaton. 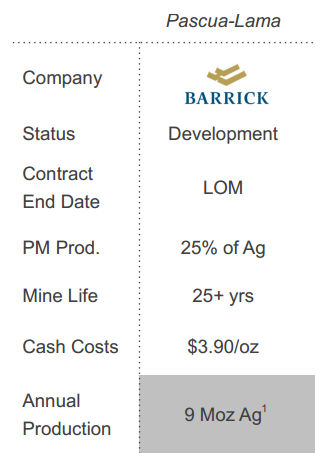 The only problem is that Barrick hasn't been able to get the mine up and running because of local opposition and, more recently, the impact of a weak gold market. The project is currently on hold. That means Silver Wheaton isn't getting what it hoped from the mine. Notably, it issued nearly 23 million shares to help pay for the deal. Thus, shareholders have been diluted since the expected benefit has yet to, and may never, materialize.

Silver Wheaton has an out, however, since part of the agreement requires it to be repaid (less the value of the silver received from the other mines, which is currently around $300 million) if Pascua-Lama doesn't get built in a timely fashion. The two companies have amended the deal a couple of times, with the completion deadline now set for June 2020. If the mine isn't 75% complete, or the agreement isn't amended again, Barrick has to return the remainder of the money.

That's a great safety net, but there's a time value to money. And getting the investment back is small consolation to shareholders who've seen earnings and dividends spread over nearly 23 million additional shares with little to show for it. To be fair, the potential offered by Pascua-Lama is notable, so taking the risk was probably worth it -- it just hasn't worked out as planned.

If you're looking at Silver Wheaton, Barrick's Pascua-Lama is really a cautionary tale. Yes, Silver Wheaton has many positive attributes, but it's still taking on risky bets that don't always work out. That shouldn't dissuade you from buying, it should only help you better understand the nature of its business.