Shares of Brazilian aircraft manufacturer Embraer (NYSE:ERJ) plunged following the company's Q2 earnings report in July. At the time, I suggested that investors had missed the point of the earnings report and that the outlook for Embraer was much better than it seemed. Investors finally seem to be recognizing this, as the stock has started to recover since September. 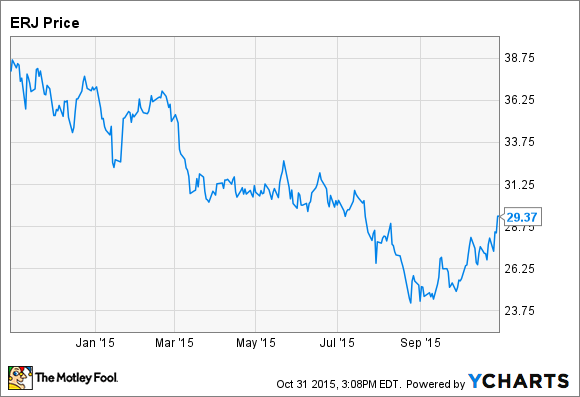 In the past few weeks, Embraer has provided further evidence of its recovery, reporting strong growth in its executive jet business, another significant aircraft order, and solid Q3 results. The business is clearly gaining momentum, which could allow the stock to outperform in the year ahead.

E-Jets sales momentum continues
Embraer is currently in the early stages of a transition period in its commercial aircraft business. In 2013, the company launched the second generation of its successful E-Jets platform, which covers the 70- to 130-seat market. However, the first of the E-Jets E2 (as they are called by the company) will not be available until 2018.

Model transitions like this often cause a sales slowdown as airlines hold out for the newer, more fuel-efficient planes in the pipeline. This can force aircraft manufacturers to temporarily reduce production. (Airbus and Boeing are currently facing this dilemma with the A330 and 777 aircraft families, respectively.)

However, demand for the first-generation E-Jets has been surprisingly resilient, driven by low fuel prices and a market shift toward larger regional jets (like Embraer's E175) in the U.S. During the first three quarters of 2015, Embraer bagged 82 net orders for first-generation E-Jets. The company also confirmed another order for 19 E175s last month, bringing it to 101 net orders year to date. That represents a full year of production.

Embraer may even need to increase production to keep up with demand in the next few years. The company currently has more than 250 firm orders for first-generation E-Jets, most of which are supposed to be delivered before the end of 2017. CEO Frederico Curado has stated that Embraer has the flexibility to increase production by 10%-20% relatively quickly, if necessary.

Business jet turnaround continues
A second area of growing strength for Embraer is the business jet market. Through the first nine months of 2015, revenue for its executive jet segment is up 8% year over year.

The executive jet market has been fairly weak in recent years as many companies have been trying to cut costs. However, Embraer has recently released two new midsize business jets -- the Legacy 450 and Legacy 500 -- that have received rave reviews. These new products should drive solid growth in this segment for the next few years.

Embraer may also benefit from rival Bombardier's recent decision to cancel development of the Learjet 85, its new midsize business jet. Customers who were planning to buy the Learjet 85 will now have to give Embraer's competing Legacy 450 and Legacy 500 models a look.

Margin tailwinds coming
Finally, Embraer is likely to experience three key margin tailwinds next year. First, the sharp fall of Brazil's real against the U.S. dollar is starting to flow through in the form of lower costs. If the real-dollar exchange rate remains near its current level, Embraer's pre-tax margin will benefit by up to 2 percentage points in 2016.

Second, Embraer's defense segment has been hit with charges totaling $90 million year to date related to the real's sharp drop. These one-time "cost-base revisions" will not recur in 2016 unless the real slumps even more. (Furthermore, in the long run, Embraer benefits from a weaker real as it has more real-denominated costs than real-denominated revenue.)

Third, Embraer will likely have a better product mix within its commercial aviation segment next year. Year to date, more than 90% of E-Jet deliveries have been the E175 model, which tends to sell at a lower margin than the larger E190 and E195 models. However, based on Embraer's current backlog, at least 20% of its deliveries next year should be the E190 and E195.

These tailwinds could be offset to some extent by pricing pressure, as Embraer has offered bigger discounts to fill out its backlog in the last few years. Nevertheless, the net impact of these factors could boost Embraer's operating income by $200 million or more.

That would represent substantial earnings growth relative to the $490 million-$560 million of operating income Embraer expects to produce in 2015. And with the E-Jets E2 arriving just two years later, there's plenty of growth still to come.