What: MedAssets (NASDAQ: MDAS) is up 30% today after announcing that it's being acquired by Pamplona Capital Management.

So what: Pamplona is paying $31.35 per share for MedAssets, which values the healthcare performance improvement company at an enterprise value of approximately $2.7 billion. That's a lifetime high for MedAssets, although shares were over $26 as recently as March 2014. 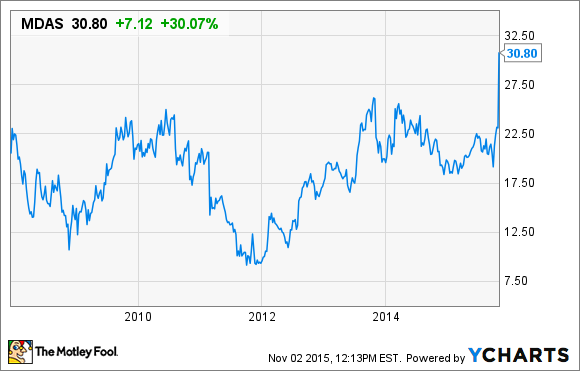 As part of the deal, Pamplona will sell off MedAssets' spend and clinical resource management segment to a healthcare company called VHA-UHC Alliance. Pamplona and VHA-UHC Alliance have agreed to work together to offer combined services for hospitals that they both serve and potentially attract new clients.

Now what: Trading at just under $31 per share, investors can hold on for the full sale price, or sell now and deploy the proceeds elsewhere.

Investors looking to stay in the same general business should take a look at Premier (NASDAQ:PINC). Last month, Premier raised guidance thanks to the addition of a contract from the Centers for Medicare & Medicaid Services. Premier is up 3.8% today, presumably because investors are hoping Premier will follow in MedAssets footsteps.

Pamplona and MedAssets didn't say when they think the deal will close, but it seems possible the transaction might be completed next year, creating potential tax decisions for investors.

In addition to those considerations, the obvious advantage of holding for a while is the possibility that another bidder might come in and offer more for MedAssets. On the downside, waiting until the close risks the deal falling through. Given the aspects of this deal, neither a new bidder nor the transaction falling through seems likely, but investors should still take those possibilities into consideration when making a decision.