What: Shares of travel-information website TripAdvisor Inc (NASDAQ:TRIP) were catching the trade winds last month, jumping 33% according to data from S&P Capital IQ. As the chart below shows, the vast majority of TripAdvisor's gains came from a single-day pop on news of a partnership with Priceline.com (NASDAQ:BKNG). 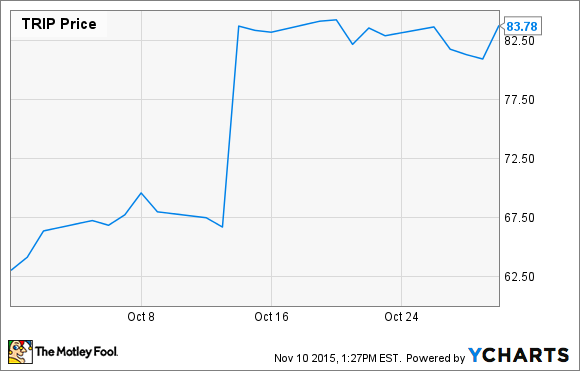 So what: On Oct. 14, Priceline said it would list a portion of its hotel inventory on TripAdvisor's new booking platform, which was launched last June. Since then, it has attracted the support of major hotel chains like Marriott International, but up until the announcement there was resistance from online booking engines like Priceline, which have seen it as competition. The partnership will begin with Priceline listing its popular Booking.com site, with the potential for other brands such as Priceline.com and Agoda.com to follow.

Priceline is the leading player in the online travel industry with a market cap of $66 billion, so its endorsement says a lot about TripAdvisor's prospects. Priceline is also known for making acquisitions, having snatched up websites like Kayak and OpenTable so the move could mean that TripAdvisor is next in its sites.

While TripAdvisor's core is made up of travel reviews, travel bookings are a much more lucrative segment of the industry so its ability to gain foothold in bookings will be key to its future success.

Now what: Following the strong performance in October, TripAdvisor shares have fallen nearly 10% after an earnings report in early November missed estimates on the top and bottom lines. TripAdvisor CEO Steve Kaufer stressed the company's focus on bookings and said it was in "the early days of this evolution" in "helping more and more travelers around the world book the best trip."

TripAdvisor has built up a healthy advertising business, with ad revenues poised to top $1 billion this year, but as the success of Priceline shows as well as the market's reaction the partnership, bookings are where the real prize is in the online travel industry. Keep an eye on future developments in that area as further integration with Priceline would also make it a more appealing acquisition target. Considering the flurry of a merger activity in the space with Expedia recently swallowing up Orbitz and HomeAway, an acquisition may be TripAdvisor's most likely fate.