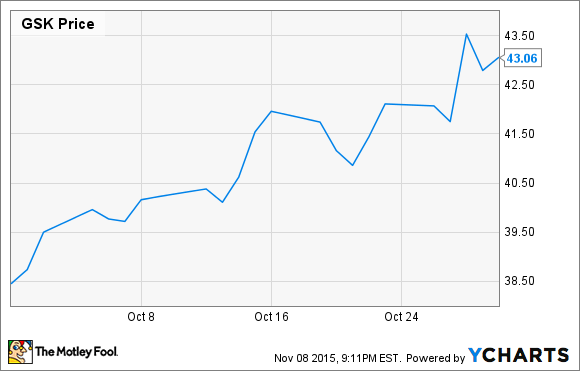 Shares of GlaxoSmithKline (NYSE:GSK), the U.K.-based pharmaceutical giant that's one of the market leaders in vaccines and respiratory therapies, vaulted higher by 12% in October, based on data from S&P Capital IQ, after the company reported better-than-expected third-quarter results and caught some positive commentary from two Wall Street investment firms.

By far the bigger of the two catalysts was GlaxoSmithKline's Q3 report. For the quarter, GlaxoSmithKline delivered nearly $9.4 billion in revenue, an 11% increase from the prior-year quarter. Sales growth of 65% in its HIV franchise, 32% growth in vaccines, and 55% constant currency sales growth in its consumer healthcare joint-venture did the heavy pulling in Q3 for Glaxo.

Adjusted earnings per share dipped 13% to $0.35, hurt mainly by the absence of a tax benefit from Q3 2014. However, both headline numbers wound up impressing the Street, which was only looking for $9.28 billion in sales and $0.30 in EPS. GlaxoSmithKline also calmed nervous shareholders by sticking to its 80-pence per year dividend and calling for double-digit percentage EPS growth next year.

The other catalyst for GlaxoSmithKline involved rating upgrades from two Wall Street firms. Credit Suisse upgraded GlaxoSmithKline to "neutral" from "underperform" on the expectation that new respiratory product launches will boost sales in 2016. Also, JPMorgan Chase upped Glaxo to "neutral" from "underperform" due to growing optimism surrounding the company's pipeline and its partnered assets.

Now that you have a better idea of why GlaxoSmithKline had such a great October, the big question you should be asking is whether it can keep going in November and beyond. On that front, I'm not entirely sure.

On one hand, there was a lot to like in the company's Q3 report. The company's diversified vaccines product portfolio is delivering growth as expected, and its transformative asset swap with Novartis appears to be paying early dividends. If Glaxo's forecast is correct, long-term investors have a lot to look forward to, with double-digit percentage growth in 2016 and around $9 billion in projected annual sales from new therapies by the end of the decade.

But the other side of this coin is that Glaxo's next-generation respiratory products are struggling to get out of the gate. Obtaining insurance coverage proved difficult for Breo Ellipta when it was approved in 2013, whereas the latest challenge for Glaxo is educating physicians about Anoro Ellipta. Between marketing its next-generation respiratory products and educating physicians, Glaxo's respiratory portfolio isn't likely to see an overnight resurgence.

For the time being I'd suggest investors' best course of action here is to remain on the sidelines until we see definitive growth from Glaxo's respiratory segment.