Stock surged into the new trading week, gaining more than 1% today. Energy stocks led the way higher as oil prices jumped up by 3%. On the other hand, the retailing sector sold off as weak third-quarter earnings results add to worries over a rough holiday shopping season ahead for traditional retailers. 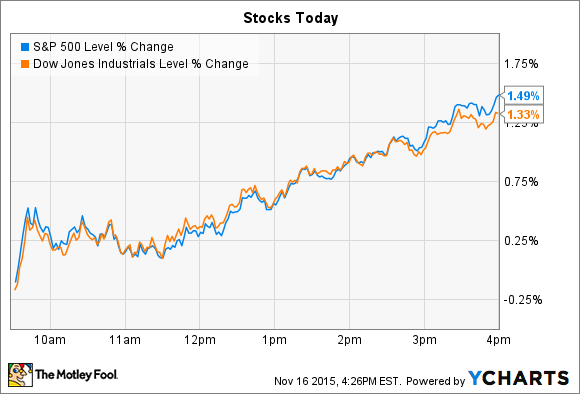 Starwood Hotels checks out
Starwood Hotels' stock fell after the company announced it was being acquired by rival hotel operator, Marriott International (MAR 1.82%). The merger promises to create a travel industry titan; at 5,500 hotels under management and over 1 million rooms around the world, it will be the largest hotel company on the planet. "This is an opportunity to create value by combining the distribution and strengths of Marriott and Starwood, enhancing our competitiveness in a quickly evolving marketplace," Marriott CEO Arne Sorenson said .

So why the stock drop? It's a matter of pricing. Marriott agreed to pay for Starwood almost entirely using shares in the combined entity. The stock trade math works out to a valuation of $12.2 billion, or roughly $72 per share. Yes, that's not much above the price that Starwood's stock has been valued at over the last few weeks. But that price does represent a solid premium over the $68 per share that it was valued at in late October, before the buyout rumors started swirling. The Wall Street Journal reported on Oct. 28 that Starwood was an acquisition target being bid on by several Chinese companies . The stock rose 9% after that report came out.

Urban Outfitters gets into the pizza business
Urban Outfitters' stock fell by as much as 9% today on four times its normal trading volume. The retailer, which operates 600 clothing stores under the Urban Outfitters, Anthropologie Group and Free People brands, announced this morning that it was entering the food business . The company agreed to purchase a collection of restaurants including the Philadelphia-based Pizzeria Vetri.

While investors strained to see the what two vastly different businesses could gain from being under the same leadership, Urban Outfitters' management sounded optimistic. "Spending on casual dining is expanding rapidly, and thus, we believe there is tremendous opportunity to expand the Pizzeria Vetri concept," CEO Richard Hayne said in a press release. The restaurant owner agreed, stating that the linkup was "a perfect match" because the two companies share the same goal: "bringing the best possible experience to our customers and community."

Yet the stock may open lower still when it begins trading on Tuesday morning, since the company announced surprisingly weak third-quarter sales growth. Comparable-store sales rose 1% to $835 million, while consensus estimates were for 7% revenue gains, to $872 million. Management blamed "weaker customer traffic" along with shipment delays out of its new wholesale distribution center in Pennsylvania for the shortfall .

Demitrios Kalogeropoulos has no position in any stocks mentioned. The Motley Fool recommends Marriott International and Urban Outfitters. Try any of our Foolish newsletter services free for 30 days. We Fools may not all hold the same opinions, but we all believe that considering a diverse range of insights makes us better investors. The Motley Fool has a disclosure policy.