Retail stocks have gotten walloped this past quarter. Disappointing results at big-box chains like Wal-Mart Stores and Target, as well as department stores like Macy's and apparel chains like Gap, have caused a sell-off across the sector. Pressures including declining mall traffic, the growth of e-commerce, and fast fashion brands like H&M and Zara are all squeezing traditional retail giants.

Not all stocks are getting lost in the shuffle, however. Foot Locker (NYSE:FL), that seemingly ordinary mall staple, has been thriving in the years since the recession. In its third-quarter earnings report, comparable sales jumped 8.7%, beating nearly every other retailer, and the stock shot up 6%. Over the last five years, shares of the athletic retailer have more than tripled, easily outperforming the S&P 500 and rivals like Finish Line (NASDAQ:FINL) and Dick's Sporting Goods (NYSE:DKS), which have tumbled with the recent retail doldrums. 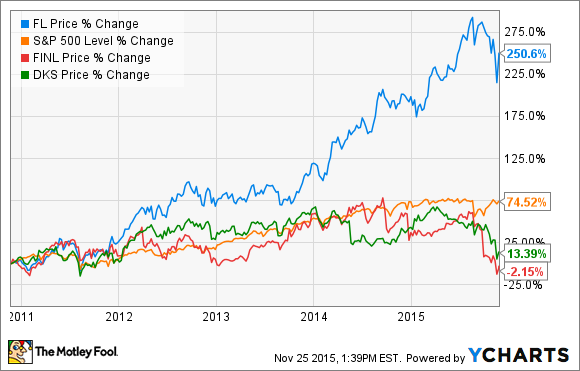 So what's in Foot Locker's secret sauce? Here are two of the main keys to the company's recent growth.

Riding the athleisure trend
While plenty of retailers have gotten hammered in recent months, there's one particular segment of the industry that's been flying high. Athletic apparel sales have been soaring, pushing the stocks of manufacturers like Nike Inc (NYSE:NKE) and Under Armour to record highs thanks to a fashion trend known as athleisure. Workout-style clothes have become more acceptable as casualwear, and more and more Americans are trading in jeans for yoga pants and other such staples of the segment.

That trend has also favored sales of sneakers, Foot Locker's core product. The chain has a 45% share of the market for basketball shoes, which tend to be expensive and high-margin, and from which the company derives half of its sales. In its recent earnings call, management noted that the sneakers of young players like Kyrie Irving and Stephen Curry are beginning to catch on, a sign that shoe sales are headed higher. Sales in the basketball category have grown at double digits for the last three years.

The company's close relationship with Nike has also helped fuel growth as the Swoosh has seen its own double-digit sales growth for the last several years. More than 60% of Foot Locker's sales comes from Nike products, and the company is Nike's most important vendor, representing close to 20% of its sales. That relationship enables Foot Locker to get exclusive Nike products, which have made it a winner with shoe-buyers.

Smart strategy
Industry trends alone aren't what made Foot Locker into the $10 billion company it is today. Much of the credit goes to Ken Hicks, the CEO who guided the company from 2009 until retiring a year ago. Hicks took over when the chain was floundering through the recession and delivered what's now 21 straight quarters of comparable sales growth and a fivefold increase in earnings per share.

He closed underperforming stores so that the company's footprint is actually smaller than it was when he took over, and invested in the remaining stores, creating synergies between the company's different chains, which include Six:02, FootAction, and Champs Sports. The stores have also become more unique by adding departments like House of Hoops, Puma Labs, and Adidas Collector Shops, which make the store a bigger draw than the product alone would. Hicks has also placed a special effort on keeping the product and the store experience fresh and new, remodeling stores and updating selections.

Foot Locker is the nation's biggest athletic footwear retailer, with over 3,000 stores worldwide, and its size and success have kept competitors like Dick's and Finish Line at bay. The company has set a goal of reaching $10 billion in sales by 2020, up from $7.5 billion last year, and increasing its sales per square foot by more than 20% to $600.

To do so, it plans to leverage many of the strategies that have already paid off: Growing the Six:02 brand for women, transforming stores, and bringing in higher-margin products. At a P/E of 17, the stock still carries just a modest valuation, especially for a company posting high-single-digit comps. If it can execute on its growth plan, the stock is sure to keep rising.