What: Shares of Targa Resources Corp. (NYSE:TRGP) declined more than 30% in November following the announcement that it plans to acquire the outstanding shares in Targa Resources Partners (NYSE: NGLS), which also saw a large decline last month.

So what: Targa Resources was trying to do a popular move as of late, buy up the stake in its master limited partnership. It's a move that Kinder Morgan did last year and one that Williams Companies was trying to accomplish before it did a reverse course and merge with Energy Transfer Equity.

The reason investors soured on the deal so much more than they did with those other deals was the fact that it looked like unitholders of the partnership were getting the short end of the stick. The premium the general partner was willing to pay for Targa Resources Partners was rather paltry considering how much shares declined in the previous 18 months and it was much less than what Energy Transfer had offered for Targa less than a year ago. 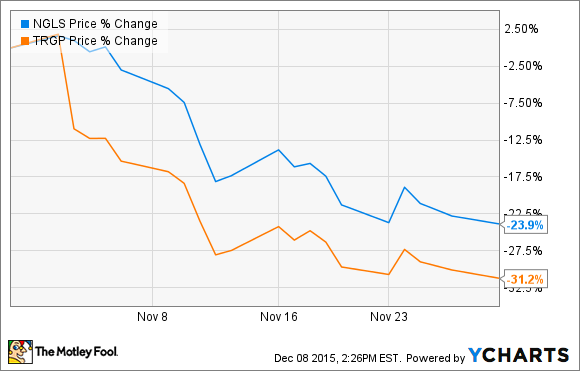 Even more troubling was that fact that some analysts thought it seemed downright silly for the general partner to forfeit its incentive distribution rights. Without them, dividend growth for the parent company will be much slower.

Add all these things together, and investors are not too keen on shares of Targa right now, even if the deal may end up saving the company quite a bit in taxes over the long term and potentially ensure the sustainability of its dividend.