Please ensure Javascript is enabled for purposes of website accessibility
Log In Help Join The Motley Fool
Free Article
Join Nearly 1 Million Premium Members And Get More In-Depth Stock Guidance and Research
By Daniel B. Kline – Dec 28, 2015 at 10:51AM

The company is going private, and that might be just what it needs.

After a fairly miserable year that saw sales fall partly because of consumer push-back against its signature K-Cup coffee pods, Keurig Green Mountain (GMCR.DL) closed the year with some stunning news.

The coffee brand, which had seen its stock decline steadily throughout 2015, accepted a buyout offer from privately held JAB Holding Company (JAB). A group led by JAB agreed to acquire the company for $92 per share, in cash or a total equity value of approximately $13.9 billion. That price was about an 80% premium over where shares were trading on Dec. 4., the last close before the sale was announced.

Though the completed sale will mark the end of Keurig as a publicly traded company, the combination of the other assets its new parent company owns and being freed from the demands of the market should be good for the company. 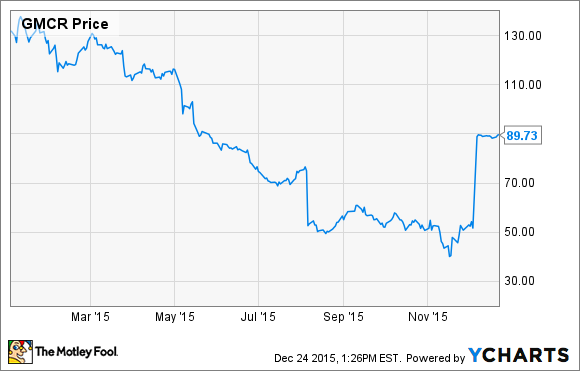 All about the acquisition
After the deal closes, Keurig will become a private company in the JAB portfolio, joining a number of other coffee-related brands. JAB is joined in the deal by strategic minority investors that are already shareholders in Jacobs Douwe Egberts B.V., including Mondelez International and entities affiliated with BDT Capital Partners.

Perhaps most importantly, the acquisition has support from Coca-Cola (KO 1.12%), which holds about 18% of Keurig. The two companies have partnered on Keurig Kold, a cold-beverage brewing system that's early in its life cycle.

"The Coca-Cola Company is fully supportive of this transaction," said CEO Muhtar Kentin a press release. "We have enjoyed a strong partnership with Keurig Green Mountain, and will continue our collaboration with JAB in order to capitalize on the growth opportunities in the single-serve, pod-based segment of the cold beverage industry."

That support is crucial if Kold has any chance of success, and it's important that JAB made sure Coke was still on board, because early results for the cold-beverage brewer haven't been great.

Why might 2015 be Keurig's best year?
Keurig is a one-product company. It has tried to establish cappuccino brewers, full-pot options, and the cold system, but it's revenue remains almost entirely tied to K-Cups.

In fiscal 2015, pod sales inched up 1% from $3.6 billion to 3.64 billion, but sales dropped 9% in the fourth quarter, partially because of consumer pushback over environmental concerns and partially because the company is struggling to sell its 2.0 line of K-Cup brewers.

K-Cups were and are a good business, but that business has either peaked or has entered a slight decline. It's possible the company will reverse that trend as it works toward a stated goal of selling totally recyclable K-Cups by 2020, but it doesn't seem as if huge growth is likely.

A profitable but non-growing business that has struggled to establish new products is one that Wall Street tends to punish. That situation forces a company such as Keurig to keep trying to find new hits. Instead of settling in and doing what it does well -- that is, sell K-Cups -- the company has chased other business segments to universally poor results.

As a private company, that process won't be necessary. Keurig will be able to grow or at least stabilize its K-Cup business while leveraging the many brands it now shares corporate ownership with. In addition, the company can either grow the Kold slowly or cut its losses without the inevitable punishment to its stock price.

Keurig will benefit from being privately held, and while we may not know all (or any of) the numbers, it's very possible 2016 will be the company's best year ever.