Worries about cord-cutting and fewer releases from its movie studios sunk the stock in 2015.

What: Investors were hitting the mute button on Twenty-First Century Fox (FOXA) shares last year as the stock fell 29%, according to data from S&P Capital IQ. The company got caught up in the media stock sell-off this summer as fears of cord-cutting grew. As you can see from the chart below, the drop came almost entirely in a span of two months. 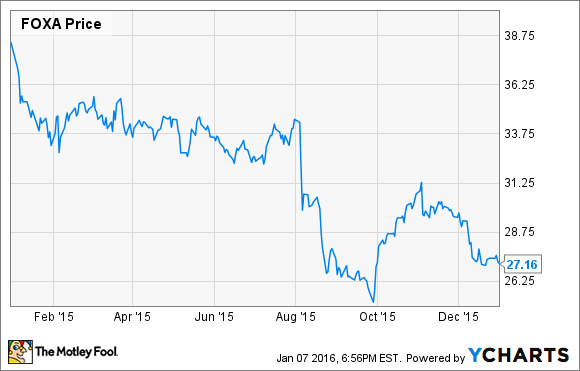 So what: The threat of cord-cutting has haunted media companies for years now, and the first of significant subscriber losses came in August, when media companies including Fox, Time Warner, Viacom, and Walt Disney Co. all tumbled.

Fox owns a number of assets including a family of movie studios. However, cable network programming makes up the majority of its revenue and almost all of its operating income. Fox owns Fox News Channel, the most popular cable news station, as well as FX, FXX, FXM, and Fox Sports.

Fox shares fell 12% over a two-day span after Disney admitted the ESPN, the most popular cable network, was losing subscribers and FOX company scaled back its own outlook in its fiscal fourth-quarter report. Television advertising sales fell as audiences fled the platform, though cable affiliate fees continued to grow. The marketwide sell-off later in the quarter sent shares plummeting again. After a mild recovery, the stock fell 5% on its first-quarter earnings release due to a lack of major movie releases and the negative impact of a strong dollar. Performance from its cable division improved.

Now what: While Fox seems to be faring well against the swell of cord-cutting, the economic landscape is not going to get better. CEO James Murdoch touted the potential of Hulu's new subscription-based platform, which could be a hedge against cord-cutting as Fox owns a partial stake in the streaming service. Analysts are expecting strong earnings growth this year as a better slate of box office releases are on tap. While the cord-cutting specter still looms, Fox seems poised for a better performance in 2016.

Jeremy Bowman has no position in any stocks mentioned. The Motley Fool owns shares of and recommends Walt Disney. The Motley Fool recommends Time Warner. Try any of our Foolish newsletter services free for 30 days. We Fools may not all hold the same opinions, but we all believe that considering a diverse range of insights makes us better investors. The Motley Fool has a disclosure policy.