It was a rough year for the controversial pharmaceutical company.

What: 2015 was a turbulent year to be a shareholder in Valeant Pharmaceuticals (BHC 9.18%). Although everything was going according to plan for most of the year, the company hit a rough patch late in the year that caused its shares to free-fall. Shares ultimately shredded nearly 30% of their starting value for the year, according to data from S&P Capital IQ. 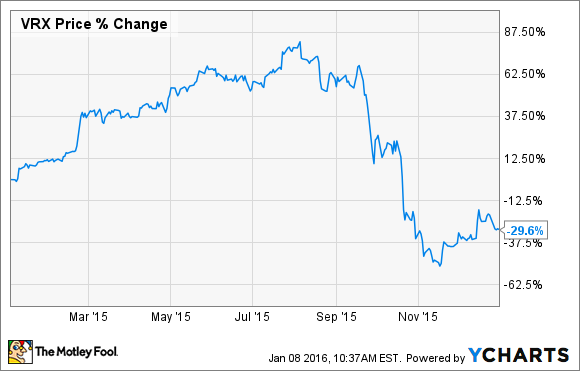 So what: Financially speaking, the company had a solid year. Revenue and profits grew at impressive rates, easily surpassing expectations, and for most of the year, the company's stock was moving higher.

However, that all began to unravel in August, when its business practices got called into question. Presidential candidates jumped on the bandwagon soon after and the stock began to crater. The sudden attention brought short-sellers into the mix, and as they started to dig in to the company, they questioned its relationship with the specialty pharmacy Philidor RX Services, claiming that Valeant was "creating invoices to deceive the auditors and book revenue."

Valeant Pharmaceuticals attempted to defend itself and its business practices, but that wasn't enough to keep its share price from plummeting.

Now what: Valeant Pharmaceuticals is still working on getting back into investors' good graces. In late December, it signed a new fulfillment agreement with Walgreens Boots Alliance (WBA 0.03%), offering the chain a 10% reduction in prices on all of its dermatological and ophthalmological products. Valeant Pharmaceuticals also agreed to sell many of its other healthcare products through Walgreens at greatly reduced prices, which the company estimates will save the healthcare system up to $600 million.

Thus far, it looks like the Walgreens deal has eased investors' fears. Since the deal was announced, the stock has halted its downward movement. However, we recently learned that CEO Michael Pearson has been placed on indefinite medical leave, so there's a huge leadership gap at a rocky time in the company's history.

What happens next with this business and stock is anyone's guess, but with so much uncertainty in the air, I think investors should approach this stock with caution.

Brian Feroldi has no position in any stocks mentioned. The Motley Fool owns shares of and recommends Valeant Pharmaceuticals. Try any of our Foolish newsletter services free for 30 days. We Fools may not all hold the same opinions, but we all believe that considering a diverse range of insights makes us better investors. The Motley Fool has a disclosure policy.