Please ensure Javascript is enabled for purposes of website accessibility
Log In Help Join The Motley Fool
Free Article Join Over 1 Million Premium Members And Get More In-Depth Stock Guidance and Research
By Ashraf Eassa - Jan 12, 2016 at 11:30AM

Although this supplier has struggled in recent years, the company painted a credible, positive long-term picture at its recent half-year financial update.

It is well-known that key to Apple's (AAPL) custom-designed A-series processors is graphics technology licensed from semiconductor intellectual property vendor, Imagination Technologies (NASDAQOTH: IGNMF). Unfortunately, despite powering the hundreds of millions of chips that Apple ships inside of its iDevices each year, the company's stock has fared quite poorly, shedding nearly 50% of its value over the last year and more than 70% over the last five years. 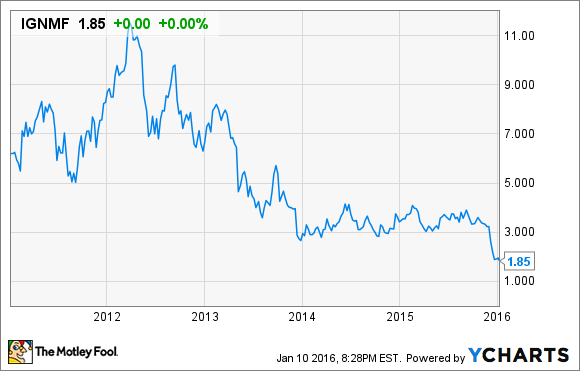 Although things are looking tough for this once-loved semiconductor IP vendor, particularly as it faces stiff competition in its core graphics IP market amid a cooling mobile devices market, the company recently highlighted a number of growth opportunities at its half-year investor update.

Here are three that stood out as particularly interesting to me.

The mobile market is still a potential source of growth
Imagination says that the market for mobile devices continues to grow, albeit at a much slower pace than it has previously (the company claims less than 10% growth in the market during 2015). The company also says that the rise of "phablets" -- or large-screen smartphones -- is having a negative impact on the traditional tablet market.

At any rate, the company says that at the high end of the smartphone market, its PowerVR XT graphics designs are "leading the market" (no doubt helped by the fact that Apple currently uses such graphics exclusively in its latest iPhones).

It is well-known that Imagination has had a bit more trouble in the low-end and mid-range, particularly as the competition there is quite fierce. However, Imagination now claims that, with its lower-end PowerVR XE graphics designs, it has "secured high volume design wins."

All told, the company claims that it's counting on graphics shipment growth of 200 million to 300 million over the next two to three years with its market segment share in the low-end and mid-range expanding.

Stop me if you've heard this one: cars!
Another area that Imagination cites as a growth market is automotive market. The company claims that the total addressable market for chips within cars is growing and that over time the unit opportunity "may become comparable to mobile."

The company claims that it has around 60% market segment share (via its partners) in smart dashboards. Imagination also says that it has meaningful design wins in infotainment systems as well as "connected car driving [communications]."

Internet of Things and wearables
One more market that Imagination played up is the market for wearables as well as the broader "Internet of Things" market. The company claims that the efficiency of its PowerVR graphics architecture "has resulted in key design wins" in the wearable market, with a prime example being the Apple Watch.

What's potentially just as interesting as Imagination's early success in supplying graphics IP into the wearables market is its apparent success in supplying CPU IP. The company said in its presentation that the efficiency of its MIPS processor designs is leading to "many design wins, especially in China."

Finally, for the broader Internet of Things market, Imagination claims that its M-class microcontroller-oriented processor cores are seeing growth thanks to "efficiency and virtualization for security & robustness."

It's not going to be easy, but the future at least looks interesting
As you can see from where Imagination's share price is currently, the company has faced some very serious challenges over the last several years. And, although management's job is, of course, to paint a "rosy" picture for investors, I believe that the story that the company is telling here is, at the very least, reasonable and credible.