CarMax has posted consistent gross profits per used unit over the past few years, but if AutoNation's industry warnings translate to CarMax's business, it could be in jeopardy.

Investors are bombarded with a constant wave of opinions and analyst upgrades, downgrades, and price targets; often times you'd do just as well be throwing a dart at a random number. However, it's worth keeping abreast of analyst opinions if for no other reason than to keep a pulse on the market and the stocks you own. In the case of CarMax, Inc (KMX -0.11%) investors are trudging through the fourth-quarter earnings report with an upgrade as well as a plunging stock price thanks to AutoNation's (AN 0.70%) CEO's comments.

Let's take a look at all of the information facing CarMax investors, and one thing you should really be watching when the company reports its fourth-quarter results.

What are analysts saying?
Just this week, Oppenheimer equities researchers upgraded CarMax, Inc from a "market perform" to an "outperform" rating in a note to clients and investors. The brokerage also put a $60.00 closing price on the stock, which is nearly 30% higher than Tuesday's $47.66 closing price. Also, in late September, RBC Capital lowered its price target on CarMax to $69 from $76, and Wedbush reiterated a "hold" rating and a $70 price target. Looking at a couple of hedge funds changing their position on CarMax, Beacon Financial Group increased its position by 3.7% in the fourth quarter of 2015, and EQIS Capital Management raised its position by 1.9%.

While those upgrades, changes in target prices, and increased positions had little impact on the direction of CarMax's stock price last week, they does seem like slightly bullish signs. One development that did impact CarMax's stock last week was AutoNation's CEO Mike Jackson's comments about automotive sales.

Why the decline?
On one hand, you have sales of new vehicles in the U.S. automotive industry hitting record highs, yet most stocks in the industry plunged last week thanks to Jackson's comments. Jackson essentially warned that the strong December sales performance, and the company's performance in the fourth quarter in general, was in part due to higher incentives and discounting. Investors have long feared that as auto sales peak and competition for market share intensifies, the major automakers would resort to profit-eroding incentives to gain or protect market share. Jackson's comments gave some panicky investors a reason to bail on auto stocks last week.

More specifically, Jackson now estimates that AutoNation's gross profit for both new and used vehicles will check in between $250 and $300 lower per vehicle. It's understandable why CarMax traded roughly 13% lower last week, because it's certainly plausible those figures could translate to a similar loss for CarMax's used vehicle gross profit.

With that said, here's a look at the history of CarMax's gross profit per vehicle. 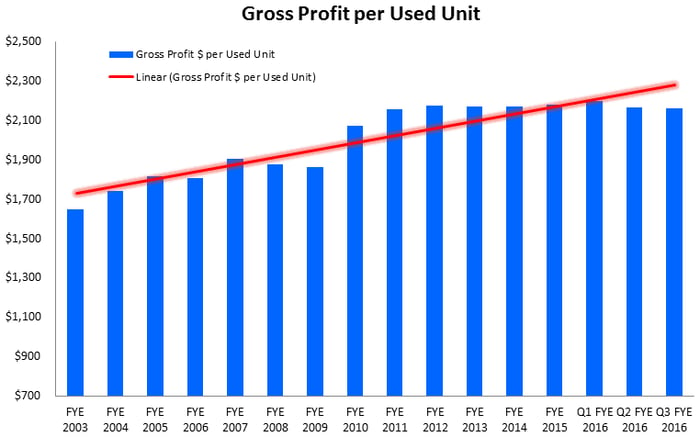 Investors can see how much pain a decline of $250 to $300 per used vehicle would cause. Though the long-term trend line is moving upwards, CarMax has recorded gross profit per used unit around $2,100 since 2011, and a more than 10% drop -- using AutoNation's estimate of roughly $250 to $300 -- would be a significant decline. That'll be one huge factor to look at during CarMax's fourth quarter because it will prove, one way or another, just how powerful CarMax's pricing power and cost controls are.

Some investors believe CarMax's pricing is a sustainable competitive advantage because of its large database of used car prices and information that few competitors, if any, can match. That valuable data enables CarMax to find a better pricing equilibrium for its vehicles than competitors. That's in part why the company has a very impressive sell-through percent of its inventory: CarMax's pricing expertise has helped it to retail more than 99% of the vehicles on its lots, compared to franchise dealers that retail about 85%, according to Morningstar, and implement a successful no-haggle pricing policy.

On one hand, if CarMax's used car gross profit declines by the same amount AutoNation warned, it would be a knock to CarMax's supposed competitive advantage of pricing power and the value of its data. On the flip side, if CarMax's used car gross profits per vehicle doesn't decline significantly, it will reinforce a strong competitive advantage that could help CarMax's stock price avoid further doom and gloom from "peak sales" and "incentive war" hysteria.

Daniel Miller has no position in any stocks mentioned. The Motley Fool owns shares of and recommends CarMax. Try any of our Foolish newsletter services free for 30 days. We Fools may not all hold the same opinions, but we all believe that considering a diverse range of insights makes us better investors. The Motley Fool has a disclosure policy.