After a rough start to the year, will Royal Caribbean sail or sink in 2016?

Shares of Royal Caribbean (RCL -5.62%) have fallen nearly 20% since the beginning of the year, but the stock remains flat over the past 12 months and remains ahead of the S&P 500's 7% decline. The cruise ship operator's bottom line has been boosted by lower oil prices, which helped it beat earnings expectations for three consecutive quarters even as sales growth missed estimates twice.

In a previous article, I noted that Royal was a better buy than its top rival Carnival (CCL -5.39%) because it posted better growth in ticket purchases and onboard revenues last quarter. However, we should also highlight four problems which could hurt Royal Caribbean's stock in 2016.

1. Potential problems in China
China's rising middle class is currently Royal Caribbean's fastest growing market. During last quarter's conference call, CEO Richard Fain admitted that expanding into China was "a major learning experience and not an easy one," but that "the market has been very receptive to our product and to our message." Fain declared that positive reception allowed it to expand the size of its Chinese fleet and increase sailings to a year-round schedule.

However, Fain also noted that the typhoons and stock market volatility in China were major headwinds during the third quarter. The company doesn't disclose exactly how much revenue comes from China, but the country is expected to account for 9% of the company's total capacity in 2016, up from 6% in 2015. Looking ahead, continued volatility in Chinese stocks and an economic slowdown could impact sales in the region.

2. Spanish speaking markets hit a brick wall
Fain also admitted that the company's Latin America strategy for its Pullmantur cruise line "hit a brick wall" when "key local markets all but collapsed." He noted that "languishing economies," "economic turmoil," and "political turmoil" all crushed Brazil, its top Latin America market, where the real plunged by 22% against the dollar during the third quarter. That mess caused the company to take a non-cash impairment charge of nearly $400 million last quarter.

Fain notes that the "silver lining" on that massive write down enables the company to focus Pullmantur on its "simpler and more attractive" Spanish base. However, Spain's economic growth still remains fragile after weathering a seven-year recession which left over a fifth of its citizens unemployed -- hardly the ideal market for luxury cruises.

3. Low fuel costs won't last forever
Due to those headwinds in Asia and Latin America, Royal Caribbean's top line growth hasn't been that impressive. Sales rose 5.4% annually to $2.52 billion during the third quarter, but missed estimates by $20 million. In the second quarter, sales rose 4% to $2.06 billion and merely matched expectations. For the full year, analysts expect Royal Caribbean's sales to grow just 3.5% this year, and for Carnival's sales to rise 4.2%.

On the bottom line, Royal Caribbean's aforementioned double-digit earnings growth will rely heavily on lower fuel costs. While fuel costs should logically remain low due to global oversupply and low demand, prices could abruptly spike due to conflicts in oil rich regions, OPEC actions, or better-than-expected economic growth in China. If that happens, margins could contract and shift the focus back to the company's lackluster top line growth. 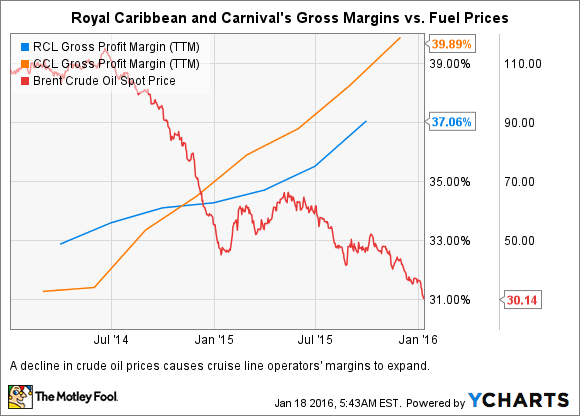 4. The stock isn't cheap
Despite its recent pullback, shares of Royal Caribbean still trade with a trailing P/E of 32, while both Carnival and the resorts and casinos industry trade at 22 times earnings. That higher multiple could leave it more vulnerable than its peers to big sell-offs.

Don't worry just yet...
Royal Caribbean certainly has a few weaknesses, but the stock remains one of the better plays on cheap oil and high consumer spending. Investors shouldn't worry about the stock yet, but they should keep a close eye on those four soft spots throughout the year. The company is scheduled to report its fourth quarter and full year earnings on Jan. 27.