This Fool has learned the code name of the follow-on to Intel's Icelake processor.

In mid 2015, website BenchLife.info leaked to the world that Intel's (INTC 4.05%) 2016 processor family would be a series of chips based on the company's Kaby Lake architecture. Prior to that leak, the technology and investment community had expected that Chipzilla would introduce its first 10-nanometer processor architecture known as Cannonlake in 2016.

The big surprise surrounding Kaby Lake is that it is built around the same 14-nanometer technology that Intel's previous two architectures -- Skylake and Broadwell -- were, signaling a slip relative to the company's traditional two-years-per-manufacturing-technology cycle.

Management has told investors that they are pushing to try to get back to a two-year cadence post-10-nanometer (presumably they mean a two-year transition from 10-nanometer to 7-nanometer), however, from what I have just learned from a source familiar with Intel's plans, the company is working on three, not two, architectures for the 10-nanometer node.

If all goes well for the company, then 7-nanometer could be a two-product node, implying a transition to the 5-nanometer technology node by the second half of 2022. However, the source that I spoke to expressed significant doubts that Intel will be able to return to a two-years-per-technology cycle.

At this point it is starting to look as though Intel could very well lose its manufacturing leadership relative to Taiwan Semi by the time TSMC transitions to the 7-nanometer node, and then TSMC could even extend this leadership at the 5-nanometer node (depending of course on how the electrical and physical characteristics of TSMC's 5-nanometer and Intel's 7-nanometer nodes compare).

It's time for Intel to start being more transparent with investors
As an Intel shareholder, I am deeply saddened that management is seemingly becoming less transparent with investors when it comes to chip manufacturing technology. From where I'm standing, it would appear that management makes statements that are not untrue, but can be interpreted in such a way so as to put Intel in a potentially "too favorable" light.

For example, management showed the following slide at its most recent investor meeting: 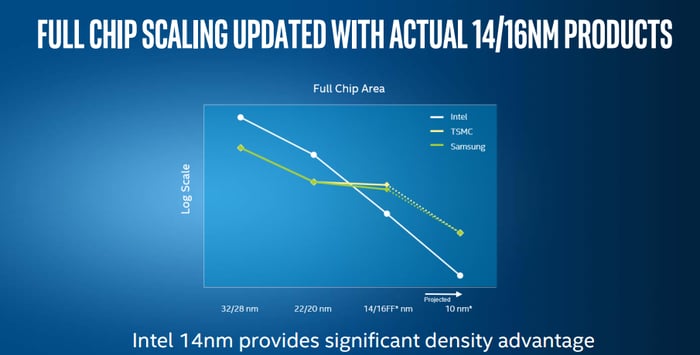 If we assume that Intel goes into mass production on its 10-nanometer in the first quarter of 2017, then this would imply that Intel falls behind for a quarter before "leapfrogging" Taiwan Semi. However, TSMC has an opportunity to catch up to, if not actually outpace, Intel once the former begins 7-nanometer manufacturing.

If Taiwan Semi actually delivers upon the timelines that it has signaled to investors, and if Intel stays on 10 nanometers for three processor generations, then it's not at all obvious that Intel has any sort of manufacturing lead over TSMC, which manufactures chips for the vast majority of Intel's direct competitors.