Please ensure Javascript is enabled for purposes of website accessibility
Log In Help Join The Motley Fool
Free Article Join Over 1 Million Premium Members And Get More In-Depth Stock Guidance and Research
By Matthew DiLallo - Jan 19, 2016 at 10:28AM

It will be really tough to top its performance over the past year.

Unlike most other energy companies, Valero Energy (VLO 4.02%) thrived in 2015. Thanks to low oil prices and strong gasoline demand, its refining margins were strong. That fueled really strong earnings growth, driving the stock price up 38%. 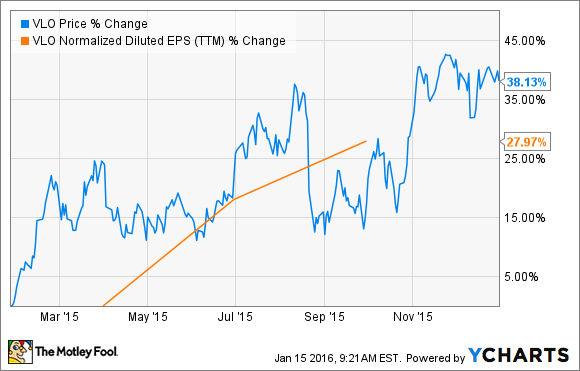 That strong performance makes it tough to expect an encore in 2016, especially in light of the weakening global economy. That said, with oil prices going lower, and a number of growth drivers on the horizon, the company could continue its very robust performance. Suffice it to to say, it's easy to make a case for both a repeat and a retreat.

The bull case for Valero Energy
Weak oil prices eventually fuel a demand response from consumers, and that's just what we've seen over the past year. In the U.S., gasoline consumption grew 2.6%, according to the U.S. Energy Information Administration, to its highest level since 2007. That was well above normal due not only to lower oil prices, but a stronger economy, as evidenced by 2.9% employment growth, combining to drive a 3.7% increase in total highway miles traveled. Gasoline consumption is expected to continue growing in 2016, albeit at a slower rate of 0.8% due largely to slower employment and population growth as well as the continued improvement in vehicle fuel economy. This growth, however, suggests continued strong demand for gasoline, which will likely lead to strong margins for Valero because it's processing even cheaper oil than it did last year.

In addition to the robust refining market conditions, Valero has two other big drivers for 2016. First, it has been investing to optimize its assets, which is noted on the following slide: 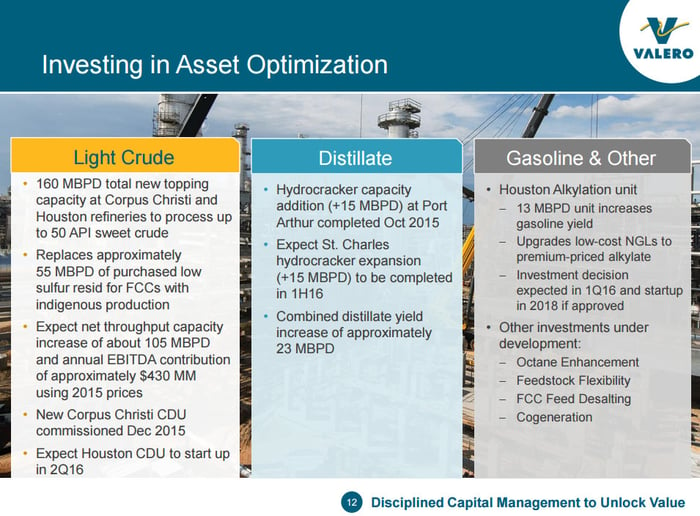 As that slide notes, these investments will increase the company's ability to process cheaper crude oil as well as increase its capacity to produce higher-valued products, which are expected to deliver a boost to the company's underlying earnings.

In addition to that, in 2016, the company plans to invest $545 million in logistics assets, which is 31% higher than last year. In time, Valero plans to drop down these assets, and others it owns, to its MLP Valero Energy Partners (NYSE: VLP). To date, it has already sold $1.3 billion in assets to Valero Energy Partners and has more than $1 billion of MLP eligible EBITDA that's produced from assets such as pipelines, storage terminals, and rail facilities that it can drop down to Valero Energy Partners in the future. In doing so, it can unlock the value of these assets because MLPs are valued higher by the marketplace than refiners. 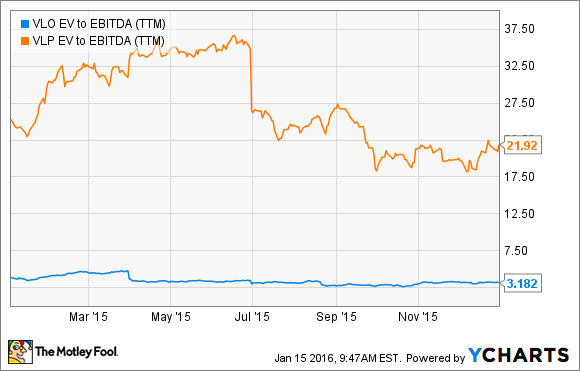 The bear case for Valero Energy
There are still some concerns heading into 2016 that could put the brakes on Valero's robust earnings growth. First of all, gasoline demand growth is slowing, and just last week, gasoline inventories jumped by 8.4 million barrels, which was well above the consensus of 2.7 million barrels and above the upper limit of the average range. This suggests refiners are producing more gas than is needed at the moment, which could crimp Valero's refining margins in future quarters if demand comes in weaker than expected in 2016.

Another potential pitfall for Valero is the continued weakness in the oil market, which has recently spilled over into the midstream space. MLP valuations have been crushed in recent months, and while Valero Energy Partners has been largely spared from this downdraft, its units are off more than 12% to start the year. The concern here is that the value of MLP-type assets is falling, which would make it less lucrative for Valero to drop these down to Valero Energy Partners. Such an occurrence would remove a key value creator for the company.

Investor takeaway
While Valero Energy is firing on all cylinders right now, it is potentially facing some tough headwinds in 2016. That makes it a bit less likely that the company will deliver a record year in 2016. In fact, it could very well take a step back if refining margins start to tighten.