Please ensure Javascript is enabled for purposes of website accessibility
Log In Help Join The Motley Fool
Free Article Join Over 1 Million Premium Members And Get More In-Depth Stock Guidance and Research
By Reuben Gregg Brewer - Jan 21, 2016 at 11:45AM

Silver Wheaton (WPM 1.58%) is a Canadian silver streaming company. The Canadian Revenue Agency, the "IRS" north of the boarder, thinks the silver and gold company owes it more in taxes than it's paid. The first round of the audit, which Silver Wheaton is fighting, took from 2005 to 2010. But before that battle has been won by either side, there's now a round two.

What's the issue?
Silver Wheaton makes up-front payments to miners in exchange for the right to buy silver (about 60% of revenues) and gold (about 40%) in the future at reduced rates. This is a win-win, since it provides the miner with much-needed funding to build and expand mines, and it allows Silver Wheaton to buy precious metals on the cheap for long periods into the future. It currently pays around $4 an ounce for silver and $400 an ounce for gold, both well below the currently subdued prices of these metals.

This is called streaming. But, just like many miners, Silver Wheaton has investments around the world, and that's the problem. Canada believes the income from the streaming company's foreign business should be taxed in Canada. Silver Wheaton believes it's in compliance with all of Canada's tax laws and, thus, is fighting the Canadian Revenue Authority's claim. Silver Wheaton hasn't put any money aside to cover the cost if it loses this fight.

How big is it?
The thing is, the numbers are pretty big. The first round of this fight got under way last year for tax years 2005 to 2010. Canada says Silver Wheaton owes taxes on an additional $570 million or so of income for those years. If Silver Wheaton loses the fight, taxes, interest, and penalties would amount to around $265 million.

To put that into perspective, Silver Wheaton's net income was around $200 million in 2014. Through the first nine months of 2015, net income was around $160 million, if you pull out an impairment charge. So, $265 million in additional taxes would hurt. But don't forget the long-term impact, since a loss would mean the company's future tax bill would be higher, too. In other words, this is a problem with legs.

Back for more
Now the Canadian Revenue Agency has started looking at tax years 2011 to 2013. Silver Wheaton warned from the get-go that tax years beyond 2010 were still open to examination. And based on the ongoing nature of the dispute, it shouldn't be much of a shock that Canada decided to deepen its review. That's more bad news for Silver Wheaton on the tax front.

According to the company, revenue subject to taxes would increase by around $310 million for the 2011 to 2013 period. Using some back-of-the-envelope math, that could mean a tax bill as high as $144 million based on the numbers provided about the 2005 to 2010 period. So, the total bill for this tax hit could be over $400 million. This is a growing issue for Silver Wheaton -- and one investors need to watch closely. 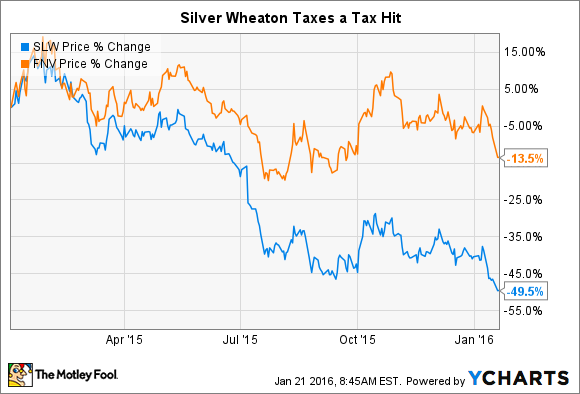 The tax issue is part of the reason Silver Whaton's shares have fallen further than peer Franco-Nevada Corporation (FNV 0.77%). Investors don't like uncertainty, and the tax issue is a pretty big question mark right now. This is particularly bad timing, too, since Silver Wheaton has been able to use the mining downturn to expand its streaming portfolio -- just like Franco-Nevada. So, while Franco-Nevada's shares have been holding up well despite falling commodities prices and the year-over-year top- and bottom-line declines that's led to, Silver Wheaton has been pummeled.

Too soon to tell
The real problem is that it's too soon to tell what's going to happen with Silver Wheaton's growing tax issue. With silver and gold prices trading at relatively low levels, the impact of a loss could be fairly painful over the short term. Then there's the lingering issue of higher taxes in future years. But, based on the share price hit Silver Wheaton has seen since the tax issues began last year and its still-strong business, more aggressive investors might want to take a look anyway. Just be prepared for some near-term pain in case Silver Wheaton loses this fight.

Reuben Brewer has no position in any stocks mentioned. The Motley Fool owns shares of Silver Wheaton (USA). Try any of our Foolish newsletter services free for 30 days. We Fools may not all hold the same opinions, but we all believe that considering a diverse range of insights makes us better investors. The Motley Fool has a disclosure policy.