Please ensure Javascript is enabled for purposes of website accessibility
Log In Help Join The Motley Fool
Free Article Join Over 1 Million Premium Members And Get More In-Depth Stock Guidance and Research
By Reuben Gregg Brewer – Jan 23, 2016 at 11:45AM

Freeport McMoRan is facing big headwinds, but this business is still the key to its future.

Freeport McMoRan (FCX 1.40%) is making the news for all the wrong reasons. And while the headlines are less than inspiring, they are actually hiding some good news in a key business. You'll want to keep on eye on Cerro Verde.

Oil, yikes!
The big headlines at Freeport today all revolve around oil. For good reason, of course, since the company's heavy debt load was basically caused by an ill-timed foray into oil drilling just as the price of that commodity was getting ready to fall precipitously. In fact, at the end of 2015, activist investor Carl Icahn appeared to have orchestrated the ousting of the company's co-founder because of what now looks like a big oil mistake. This, by the way, is a similar game plan to the one Icahn used at Chesapeake Energy.

Oil isn't the only place Freeport is hurting; its core copper and gold operations are suffering from low commodity prices, too. But the debt overhang from the oil investment has led to a string of unfortunate, but necessary, moves like deep cuts in spending across the entire company and the elimination of the dividend. So, it's easy to see why investors have punished the shares. 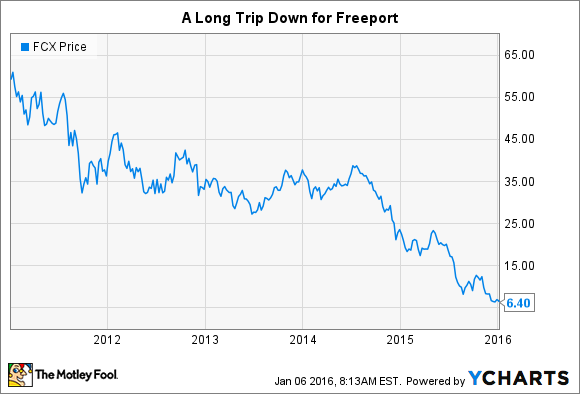 Any good news?
But all these negatives mask some operational bright spots. For example, all of Freeport's copper mines are cash flow positive as long as copper stays above $2 a pound. Copper is painfully close to that figure right now, but the miner is clearly prepared for the pinch of low commodity prices on the metals side of things.

And that's where Cerro Verde comes in. This is Freeport's giant mine in Peru. The company has been working on and off to expand this mine since 2008, after it was added to the fold in the Phelps Dodge acquisition. It's been a long time coming, and the company has spent billions on the project; the Cerro Verde expansion is scheduled to come on line this year. 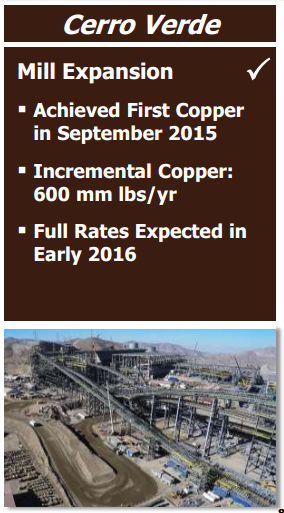 What can Cerro Verde do?
The thin that makes this mine speical is simple. Size. Did I mention it's huge? At full capacity, it would account for 3% of the world's current copper supply. Running it at full bore would consume nearly 10% of Peru's electricity. The mine site spans 150,000 acres. No joke -- it's massive.

But just being big isn't enough. Cerro Verde is using modern technology to turn scale into cost savings. In fact, the mine can spit out copper at a cost of around $1.50 a pound. That makes it one of Freeport's lowest-cost copper operations. Bruce Clements, the president of the company's mine business, recently told The Wall Street Journal, "You'd have to close a lot of mines before this one gets shut down."

In other words, Cerro Verde is going to be an important asset for Freeport for years to come, even in the moribund commodities market we face today. In fact, the biggest benefit might be the ability to shutter higher cost mines and, thus, reduce Freeport's overall costs. To give you an idea of how much flexibility this one project could give Freeport, it expects an incremental increase in production of roughly 150 million pounds a quarter (600 million pounds a year). That's about 15% of the miner's third quarter 2015 production.

To be fair, though, Freeport isn't the only miner scaling up its mines. Rio Tinto (RIO 2.27%) and BHP Billiton (BHP 2.17%) have also been increasing the scale of their top mines, reducing costs by integrating such things as self-driving trucks and trains to increase efficiency.

Unfortunately, the more big mines there are, the longer commodity prices are likely to feel the sting of oversupply. So, there's a negative to this "big" trend. But that shouldn't diminish the value these mines provide to their owners over the long term.

That's why, with so much attention being paid to Freeport's oil business, you'll want to make sure you give the company's world-class copper operations the kudos they deserve, too. And at this point, Cerro Verde is looking like it will quickly become a crown jewel when it ramps up to full steam later this year. Keep an eye on the mine's progress -- it will be important as the company works back from its debt overhang.

Reuben Brewer has no position in any stocks mentioned. The Motley Fool owns shares of Freeport-McMoRan Copper & Gold. Try any of our Foolish newsletter services free for 30 days. We Fools may not all hold the same opinions, but we all believe that considering a diverse range of insights makes us better investors. The Motley Fool has a disclosure policy.