Please ensure Javascript is enabled for purposes of website accessibility
Log In Help Join The Motley Fool
Free Article Join Over 1 Million Premium Members And Get More In-Depth Stock Guidance and Research
By Lee Samaha - Jan 30, 2016 at 8:33AM

The latest retail sales and dealer inventory figures from Deere & Company (DE -1.28%) gave little cause for optimism. Consequently, the near-term risk in the stock is increasing. Longer term, Deere may be an attractive stock -- its prospects can turn around quickly if crop prices start to rise -- but investors are going to have to stomach the potential downside from a number of challenges in 2016. Let's take a quick look at the latest update from Deere.

Deere's December retail sales
With the exception of combines, Deere's retail sales performance in December was better than the industry across the board. Moreover, its inventory position is also better than its rivals'. However, the data shows strong declines in the key market for tractors above 40HP. 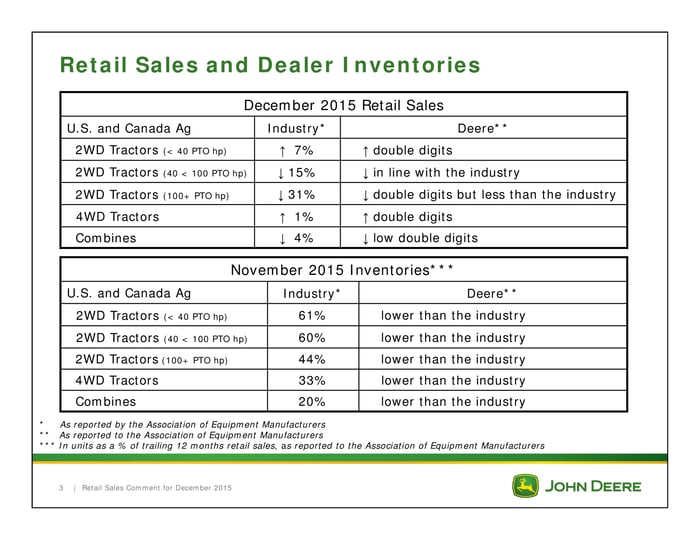 For example, here is Deere's manager of investor communications, Susan Karlix, on the fourth-quarter earnings call in November: "Low commodity prices and stagnant farm incomes are continuing to pressure demand for farm equipment, with the decline being most pronounced in the sale of high-horsepower models."

Rivals suffering
AGCO Corporation (AGCO -1.83%), owner of Massey Ferguson and Challenger, is also seeing pressure. A breakout of its estimated 2015 revenue shows its reliance on large agricultural machinery. Note that AGCO generates only around 3% of its revenue from the sub-40HP machinery market. 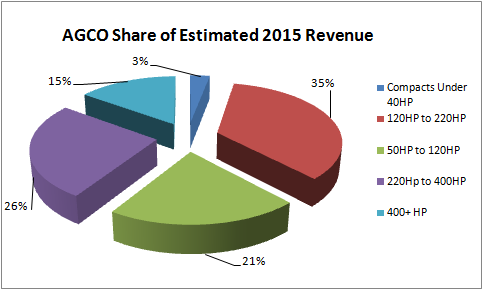 It gets worse. Back at the start of December, a dealer of CNH Industrial (CNHI -2.56%) equipment, Titan Machinery, Inc. (TITN 1.85%), had its CEO, David Meyer, describing how its third-quarter earnings were affected by "lower-than-anticipated revenue contribution from our parts and service businesses." He added: "Farmers throughout our key market experienced very favorable harvest conditions, which resulted in a relatively fast harvest requiring minimal equipment repairs."

Titan Machinery generates the bulk of its profit from parts and service business, so it's obviously an issue for the company, and original equipment manufacturers are also likely to be affected. A farmer who hasn't had to replace parts or service his tractor is probably less inclined to see the need to replace it -- a consideration for CNH Industrial investors and the rest of the industry.

The takeaway
All told, Deere's latest sales data gave little support to the idea that the sales decline is moderating just yet, and Titan Machinery's results are also a cause for concern. As ever, commentary on Deere should be qualified with the proviso that higher crop prices can turn things around, but until that happens, Deere's near-term risk makes the stock worth avoiding, in my view.