Please ensure Javascript is enabled for purposes of website accessibility
Log In Help Join The Motley Fool
Free Article Join Over 1 Million Premium Members And Get More In-Depth Stock Guidance and Research
By Jeremy Bowman - Feb 7, 2016 at 8:32AM

After a standout 2015, Expedia shares have pulled back. Is this a buying opportunity?

What: January was a bad month for the online travel industry and it was no different for Expedia Inc. (EXPE -3.45%). The perceived slowdown in the global economy and analyst downgrades pushed Expedia shares down over the course of the first two weeks of January along with the broader market. 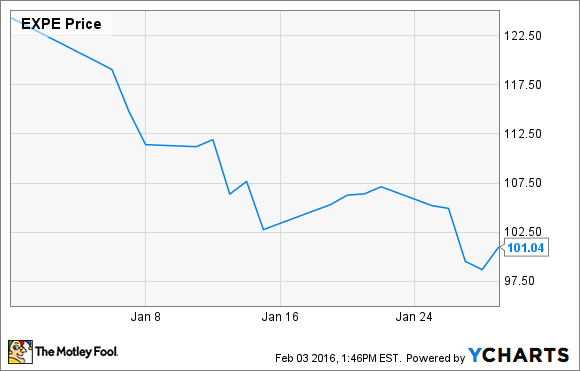 So what: After jumping 46% in 2015, the initial sell-off may be a sign that the market believes the stock was overbought.

Several times throughout the month Expedia's price target was lowered. On Jan. 15, Evercore ISI dropped its price target from $155 to $129, and Expedia dropped on a downgrade for rival Priceline.com earlier in the month as Raymond James cited competition from Airbnb and hotel consolidation as factors that could impede the online travel agents' growth.

Toward the end of the month, Expedia fell again as Goldman Sachs downgraded Priceline and TripAdvisor and lowered its price target on Expedia all the way to $93 from $135. Goldman cited concerns about Airbnb as well. Deutsche Bank also issued a bearish note on the online travel industry, mentioning fears of terrorism following November's Paris attacks.

Both banks also noted the threat of hotel industry consolidation, which is expected to give the major hotel companies greater leverage against the OTAs.

Now what: Wall Street appears to be turning its back on the online travel industry, citing competitive threats and macroeconomic factors, but there's good reason to believe in the long-term growth of the industry. Priceline and Expedia have eliminated competitors, helping to boost profit margins, and the travel industry should continue to grow as consumers in the developing world enter the middle class and the global economy expands.

Even Airbnb offers a way to encourage travel by providing an alternative to hotels, and low oil prices have also put more money in travelers' pockets and made airfares cheaper. Expedia shares are now down nearly a third from their all-time high just a few months ago, but analysts are expecting EPS to grow by more than 40% this year. If Expedia can deliver on that expectation, shares should bounce back.