What: Shares of Transocean (NYSE:RIG) declined 15.8% in January as more and more signs point to an extended slump in drilling activity.

So what: With each passing day in this oil and gas market, the negotiating power for new rigs moves into the hands of the producers that contract the rigs. Low oil prices mean they can push cost savings onto their contractors to make up for the loss of revenue. At the same time, the oversupply of rigs on the market today also means that contractors such as Transocean will fight tooth and nail to get one of the few contracts up for grabs right now. For 18 months now, this has been the case against Transocean, and it doesn't appear that this situation will improve any time soon. 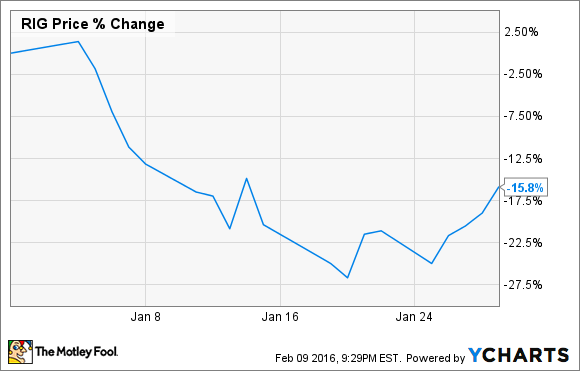 According to most oil services executives whose companies have already reported earnings, they aren't expecting prices for oil to improve until at least the second half of 2016, and even when they do, it will take a while before companies get the appetite to go out and drill for new oil sources. Then there's the fact that there are too many rigs on the market that lead to lower contract rates. Until all of these issues clear, Transocean and its peers will continue to struggle.

Now what: Transocean has done a commendable job handling the downturn thus far. It has quickly moved to scrap many of its older rigs that are at or near the end of their service life to concentrate its sales efforts on its newest, higher-specification rigs. At the same time, it has shed close to $7 billion in liabilities over the past three years to shore up the balance sheet. As more and more of its older fleet rolls off contract, don't be surprised if we see the company scrap those ones as well.

Investors looking at Transocean might be tempted by the fact that its shares are down more than 80% over the past two years, but considering the amount of headwinds still facing the offshore rig industry, there's no rush to go out and buy shares of Transocean today. It's probably best to simply watch from the sidelines to see how Transocean handles the remnants of its legacy fleet, its remaining rigs under construction, and its debt levels.