Please ensure Javascript is enabled for purposes of website accessibility
Log In Help Join The Motley Fool
Free Article Join Over 1 Million Premium Members And Get More In-Depth Stock Guidance and Research
By Tyler Crowe – Feb 10, 2016 at 9:30AM

After receiving a late-to-the-party downgrade and some less-than-promising news in Noble's fleet status update, Mr. Market did not respond well.

What: Shares of Noble Corporation (NEBLQ) declined 26% in January after receiving an analyst downgrade, and showing some rigs rolling off contract on its most-recent fleet-status report.

So What: It sure is a good thing that analysts are downgrading rig companies lately; otherwise, how on earth would everyday investors ever figure out that shares of companies like Noble are underperforming? Oh... wait. 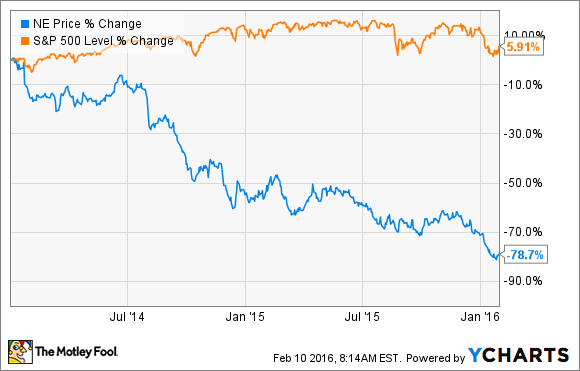 According to Cowen & Company, the analyst firm that downgraded Noble, it expects the down cycle for rigs to last potentially into 2018 due to both low oil and gas prices, but also because of the oversupply of rigs on the market. Interesting side note: Despite all that pessimism, the analyst firm still rates Noble with a market perform.

The other spat of bad news came when Noble released its most-recent fleet-status report. In it, the company noted that three of its rigs had rolled off contract in January, and another one was set to end its contract in February without more work in place. In total, nine of Noble's rigs will come off contract in 2016. If Cowen's premonitions about the market are correct, Noble may struggle to find work for these rigs for a while.

Now What: In the grand scheme of things, neither of these two things should come as a surprise. Noble's fleet-status reports have been saying that these rigs would roll off contract in 2016 for quite some time, and we're all well aware that rig companies aren't doing so well right now. Noble has the benefit of being one of the rig companies in the best financial shape, so that should help it weather the storm better than others. However, the market will probably continue to be pessimistic about Noble, and all rig companies, until we start to see producers open their wallets again.