Please ensure Javascript is enabled for purposes of website accessibility
Log In Help Join The Motley Fool
Free Article Join Over 1 Million Premium Members And Get More In-Depth Stock Guidance and Research
By Reuben Gregg Brewer – Feb 16, 2016 at 8:55AM

Corning is a glass maker extraordinaire, but here are three reasons the stock could go even lower.

Corning Incorporated (GLW -2.03%) traces its roots back to dishes and cookware. But that's not what it does today, having divested that consumer-facing business in the late 1990s. Now it creates high-tech glass for industries ranging from life sciences to aerospace and defense to consumer electronics. That high-tech focus, however, has been a drag on the company of late and could cause Corning stock to fall even further than it has. Here are three issues to watch.

Big displays
Corning's largest business segment, representing about 40% of revenues, provides glass for "displays." Essentially, it makes the liquid crystal displays (LCDs) that are in laptops, televisions, and computer monitors. It's a world leader in the space but clearly reliant on end market demand for these items. On that score, the company's display sales declined 8% year over year in 2015. That came from a mixture of lax demand and some pricing weakness.

On a positive note, Corning believes it outperformed the broader display market and was able to extend a couple of key contracts. But that doesn't change the fact that the glass maker can only sell as many displays as its original equipment customers expect to sell. And global economic headwinds have clearly led demand lower. If there's a global recession, demand could quickly get worse since consumers can usually push off laptop, computer display, and television purchases without too much impact on their lives.

That said, LCD displays aren't the only economically sensitive end market for Corning. Its Environmental Technologies business sells advanced ceramics to the auto sector, and Specialty Materials sells things like coatings for smart phone displays. Together these are about 20% of revenues. In other words, Corning's business is pretty economically sensitive. Investors would likely sell Corning shares quickly in a recessionary environment.

Leading the way
From a bigger-picture perspective, Corning has long been an industry leader when it comes to innovation. That requires a huge amount of spending on research and development. For example, in 2014 the company spent a touch over 8% of its revenues on R&D, or roughly $800 million. That number fluctuates over time, but the general trend is up.

Corning's end markets are competitive, so it has no choice but to be at the leading edge. However, spending lots of money on research doesn't guarantee success. If a competitor comes out with a better product, Corning could quickly fall behind. That's particularly true if patents prevent Corning from easily replicating its competitors' successful products. If there's any hint that Corning's products are lagging behind industry demands or competitive offerings, investors won't be pleased.

On the flip side, Corning also has to stay on top of competitors to ensure its patent rights are protected, a task that can add costs to its business model when cases have to be brought. Although this isn't as big an issue as falling behind, losing an important patent case could leave the company open to notable competitive headwinds. This is an ever-present issue that could rear its ugly head at almost any time.

Big customers
The last risk that could cause Corning's shares to fall is customer concentration. While it sells to a variety of industries, 10 customers account for nearly half of its sales. If anything were to adversely affect one of these large customers, Corning's results would suffer and investors would likely react by selling. 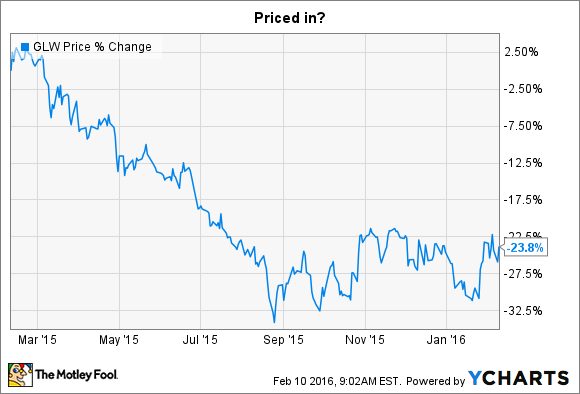 Down, not out, but not riskless
Corning shares have fallen around 20% over the past year. With its high-tech glass products, investors might be wondering if now is a good time to jump aboard. And perhaps it is. But if you're looking at the shares, you should make sure to think about the company's economic sensitivity, constant need for innovation, and customer concentration. These are risks that could quickly send the shares lower than they already are.

Reuben Brewer has no position in any stocks mentioned. The Motley Fool recommends Corning. Try any of our Foolish newsletter services free for 30 days. We Fools may not all hold the same opinions, but we all believe that considering a diverse range of insights makes us better investors. The Motley Fool has a disclosure policy.