Crunching the numbers on the paper goods giant.

Kleenex is one of Kimberly-Clark's many brands.

In today's volatile market, investors like to count on a stock like Kimberly-Clark (KMB -0.85%). The household products giant and parent of well-known brands like Huggies and Kleenex offers refuge from market turmoil as a defensive stock with a solid dividend yield. With a portfolio of paper products that consumers need no matter what happens to the economy, Kimberly-Clark is the kind of business that can thrive even during a recession, and it's bucked the market's downward trend this year, gaining 4.5% against the S&P 500's loss of 5%.

The five charts below give you the 30,000-foot view of Kimberly-Clark stock today.

Soaring returns
Though this isn't a flashy growth stock, Kimberly-Clark has still delivered outsized returns in recent years. The stock has tripled since the recession, and more than doubled over the last five years, gaining 114% against a 48% appreciation for the S&P 500. 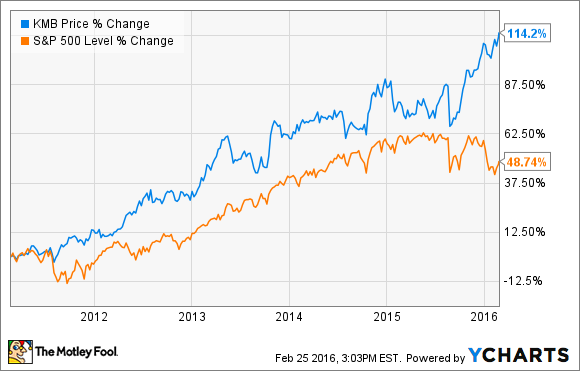 As you can see from the chart, the divergence between Kimberly-Clark and the S&P 500 has been substantial since the market correction in August, as the paper goods-maker has lived up to its reputation as a safe stock to own.

During that time frame, Kimberly-Clark has also outperformed all of its peers except for Church & Dwight, indicating the company's defensive position wasn't the only factor in its strong growth. 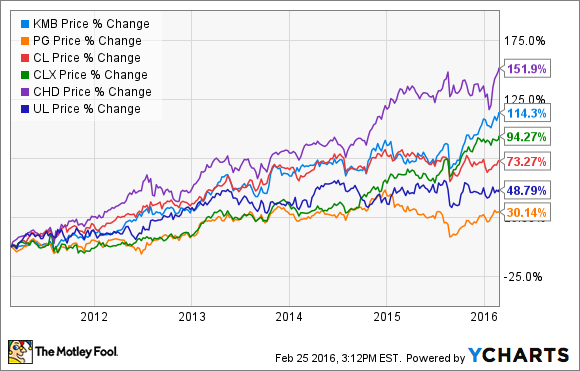 Between 2010 and 2015, Kimberly-Clark's adjusted earnings per share increased from $4.68 to $5.76, a gain of about 23%. Therefore, much of the stock's improvement can be attributed to multiple expansion rather than earnings growth. A stronger dollar has also put a dent in earnings growth in recent years.

Over the last five years, Kimberly-Clark's P/E ratio has expanded from 13 to 23, tracking with a more modest appreciation in the S&P 500's earnings multiple from 16 to 21. That increase may be a sign that the stock's strong performance over the last five years won't be repeated, as underlying profits are only expected to grow modestly. For 2016, management forecast an increase in earnings per share of 3% to 7%.

Dividend growth
For many investors, the reason to invest in Kimberly-Clark is its outstanding record of dividend growth. The company is one of the S&P 500 Dividend Aristocrats, a select group of stocks that have increased their dividends annually for 25 years or more. The ability to do so shows that they can generate cash flow through recessions and other challenging times, are able to consistently increase profits, and are committed to rewarding shareholders.

Kimberly-Clark first paid a dividend in 1972, and it has raised for 44 years since. The chart below shows the last 20 years of dividend hikes.

Kimberly-Clark's dividend has more than quadrupled in the last 20 years. Over that stretch, the company has increased its dividend by an average of about 8% a year, and it's maintained that rate over the last five years as well. It just announced its most recent dividend hike, increasing the payout 4.5% from $0.88 a quarter to $0.92.

At 67%, its payout ratio is a reasonable for a dividend stock -- but if earnings per share continues to grow in the low-to-mid single digits, the dividend increases may slow from their historical average of around 8%.

The other key question on dividends is the yield. As you can see from the chart below, Kimberly-Clark's dividend yield is lower than it's been in more than 10 years. 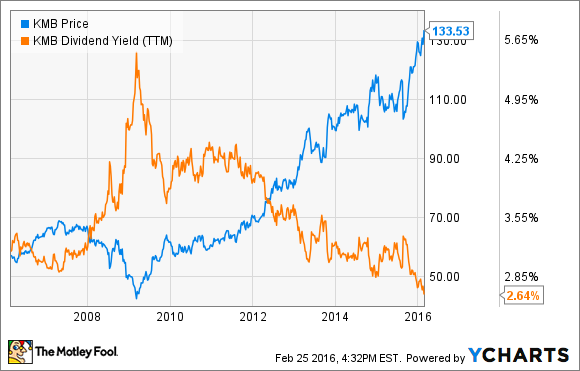 That's a sign that its dividend growth has failed to keep up with the stock price, mainly because the stock has increased through multiple expansion rather than earnings growth. That also means that Kimberly-Clark stock is less compelling for new investors than it has been historically.

Compared to its peers, Kimberly-Clark's yield is now lower than Procter & Gamble and Unilever, though for much of the past ten years it had offered the best yield of the bunch. 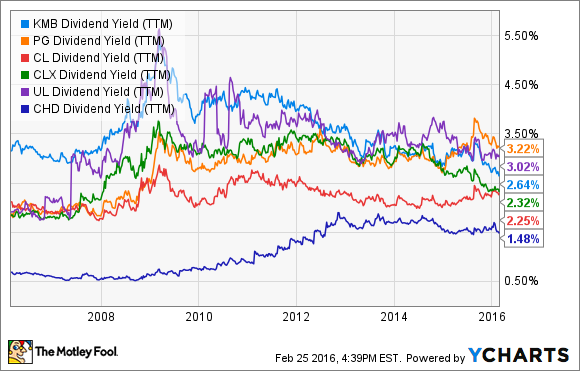 New investors looking for a defensive stock may be inclined to invest in P&G or Unilever rather than Kimberly-Clark.

Based on its recent multiple expansion and its projected slow earnings growth, Kimberly-Clark stock is unlikely to repeat its performance of the last five years. Still, the stock is a proven winner in volatile markets like this one. If the S&P 500 continues to fall, expect more investors to pile into Kimberly-Clark.

Jeremy Bowman has no position in any stocks mentioned. The Motley Fool recommends Kimberly-Clark, Procter & Gamble, and Unilever. We Fools may not all hold the same opinions, but we all believe that considering a diverse range of insights makes us better investors. The Motley Fool has a disclosure policy.