Moving packages around the world is a good business, particularly in the Internet age.

United Parcel Service (UPS 1.34%) is at the forefront of a major change: Internet shopping. That may not sound too exciting -- online shopping is not a new thing after all -- but it is an increasingly important trend in the retail industry. Couple that with UPS' massive scale, and there's plenty of reasons to believe the stock could rise.

1. Online sales are boosting delivery volume
The long-term trend toward Internet shopping is huge. For example, retail giant Wal-Mart has expressly been focusing on this sales channel as it reworks its business. To give you an idea of how big an opportunity this is, in the third quarter of 2015 the company's comparable-store sales increased 1.5%, with e-commerce growing around 10% (this is before the all-important holiday shopping season). Wal-Mart is hardly alone in its online push. 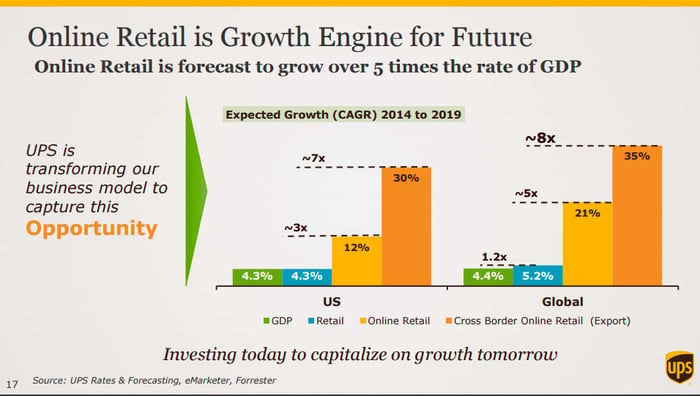 Now, UPS clearly doesn't deliver things like groceries, but it does play a big part in delivering just about everything else that gets mailed or shipped. To give you an idea of how big a deal this is, the company delivered more packages during the peak holiday season in 2015 than it had ever delivered before -- over 612 million. That's directly related to online commerce and was a 7% increase year over year.

So, with online retailers increasingly being joined by brick-and-mortar retailers on the Web, UPS is playing a key role in delivering what you and I are buying online. That's a long-term trend that is still picking up steam and that should lead to continued volume growth and increased profits.

2. High barriers to entry in the logistics business
Another reason that investors are likely to afford UPS a premium valuation is that it has a logistics network that would be virtually impossible for a competitor to build from scratch. Although Amazon has been talking about trying to build out a delivery network, including using drones, and Wal-Mart talks up its stores as a distribution system, door-to-door delivery is still key.

And it's hard to replicate what UPS has built. UPS has over 100,000 ground delivery vehicles, more than 500 aircraft (owned and leased), nearly 75,000 locations where a package can be dropped off for delivery, and around 1,900 operations facilities, and it does business in some 220 countries and territories.

That's not something you build overnight, and the cost to create such a network would be huge. That gives UPS an advantage over new entrants and smaller players. In fact, there are only two other delivery players in the U.S. with that kind of reach: FedEx (FDX -1.37%) and the U.S. Postal Service. This is doubly important because size also creates economies of scale, which helps to keep costs down and profits up. Indeed, it's not only expensive to build a giant delivery network, but it's expensive to maintain one, too. As more and more packages head out to customers, UPS' size will increasingly be an important distinction and should lead investors to afford it a premium valuation. 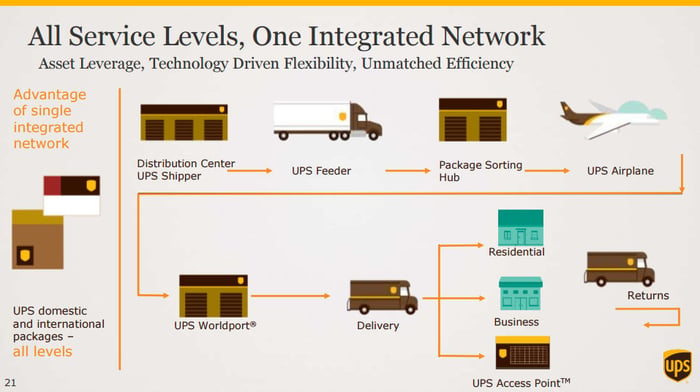 UPS has you covered from door to door. Image source: UPS.

3. UPS is playing package Pac-Man
Another reason investors might send UPS shares higher is acquisition-led growth. To be fair, the big news on this front is FedEx's planned purchase of Dutch TNT Express for $4.8 billion. This was the same company that regulators stopped UPS from acquiring in 2013, fearing it would give UPS too much industry clout. Obviously, it's not a good thing when one of your direct competitors picks up the company you were barred from buying. But UPS has other deals up its sleeve.

For example, UPS recently bought Coyote Logistics for $1.8 billion. Coyote is a broker that handles full-truckload freight, with business in areas like food, beverage, consumer packaged goods, and even heavy equipment and construction. It expands UPS' reach in the full-truckload category and adds new customers to its Rolodex. While TNT would have been a better fit with UPS' package delivery services, Coyote creates a platform for long-term growth elsewhere in the company.

If UPS can keep using its massive size to swallow up smaller competitors and to get a seat at the table of other logistics markets, investors are likely to bid the stock's price up over time. TNT would have been a nice addition, but it's not the only game in town.

Big is a good thing
For UPS, being a giant in the logistics and package delivery space is a good thing. It means it's a go-to resource as e-commerce continues to expand, it provides a competitive moat and cost advantages, and it gives the company the wherewithal to acquire its way to even more scale and reach. Although there will be ups and downs in its business over short periods of time, the long-term looks bright.