What: Shares of Tyson Foods (NYSE:TSN) hit all-time highs last month, climbing 21% according to data from S&P Global Market Intelligence, on a strong first-quarter earnings report. As the chart below shows, the stock started climbing higher on Feb. 5 and kept moving higher throughout the month. 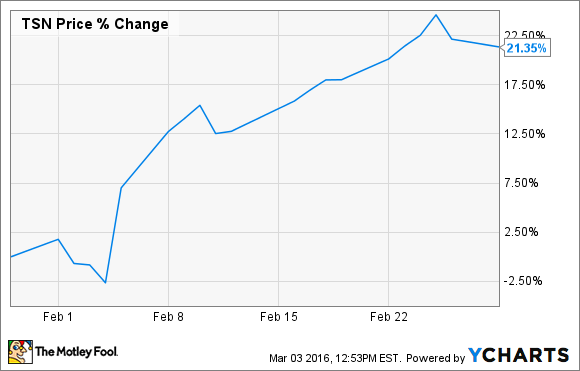 So what: The nation's largest poultry producer blew past earnings estimates with a per-share profit of $1.15 against the consensus at $0.89 though revenue of $9.2 billion missed expectations at $10.07 billion. Revenue declined 15% as prices fell in all segments, including double-digit drops in beef and pork. CEO Donnie Smith credited investments in the Core 9 product lines, which includes brands like Jimmy Dean and Hillshire Farms, for the strong performance. As a sign of his confidence in the company's continued growth, management raised EPS guidance for the full year to $3.85-$3.95, up form a prior range of $3.50-$3.65. Profit growth in beef and prepared foods was especially strong, and declining expenses for feed, livestock, and other costs helped drive per-share profits up 49%.

Now what: In addition to the strong profit growth, Tyson has also been aggressively buying back shares, repurchasing more than $550 million worth in the past two quarters. The board of directors also authorized a repurchase increase of 50 million shares.

Analysts have credited strategic decisions by CEO Smith for the company's turnaround as the stock has more than tripled in the past five years. Among other moves, Tyson acquired Hillshire Brands in 2014 as part of Smith's focus on higher-margin prepared foods like sausages, and has also implemented a "buy-versus-grow" strategy, purchasing chickens from suppliers to complement the company's flock, reducing risk.

Though meat and poultry remain a slow-growth industry, Tyson's operational improvement and commitment to buybacks should drive continued growth.