What: Investors in Acadia Healthcare (NASDAQ:ACHC), an owner an operator of inpatient psychiatric facilities and treatment centers, had a rough February as the company's stock shed more than 10% of its value during the period, according to data from S&P Global Market Intelligence. 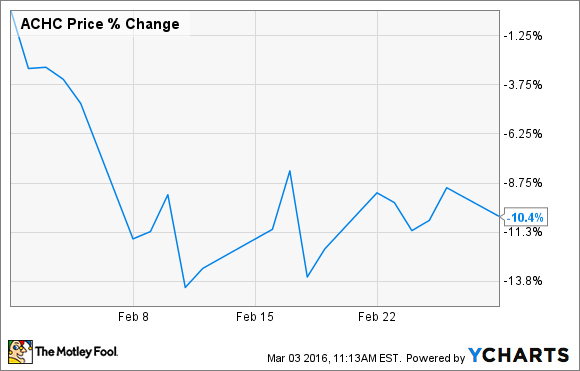 So what: Acadia reported its fourth-quarter and full-year results during the month, and it contained mixed results. Revenue in the fourth quarter jumped a huge 68% to $495.3 million when compared to the same period a year ago and came in above the $490 million that analysts were expecting. However, adjusted earnings per share for the quarter grew by 28% and landed at $0.59 per share, which was a penny shy of what the pros were looking for.

Looking beyond the headline numbers, Acadia once again had a very busy quarter as it continues to grow its network both organically and through acquisitions. It added 149 new beds throughout its existing network of facilities, and it gained another 200 beds through its closing of five acquisitions during the quarter.  For the full year, the company completed 17 acquisitions, which added a total of 3,450 beds and 107 comprehensive treatment centers to its network.

Acadia isn't slowing down in 2016, either -- it recently closed on its previously announced $1.89 billion acquisition of the Priory Group, a provider of behavioral healthcare services located in the United Kingdom. The deal added 300 new facilities and more than 7,200 beds to its network.

As of the company's February report, it operated a total of 585 behavioral healthcare facilities in the U.S., Puerto Rico, and the U.K., which comprised approximately 17,100 beds.

Now what: Acadia's strategy of growing organically and via acquisitions has worked out quite well for investors as the stock has smashed the returns of the healthcare sector in general over the past five years. Comparing the returns of its stock to that of a popular healthcare ETF such as the Health Care Select Sector SRPDR (NYSEMKT:XLV) is telling. 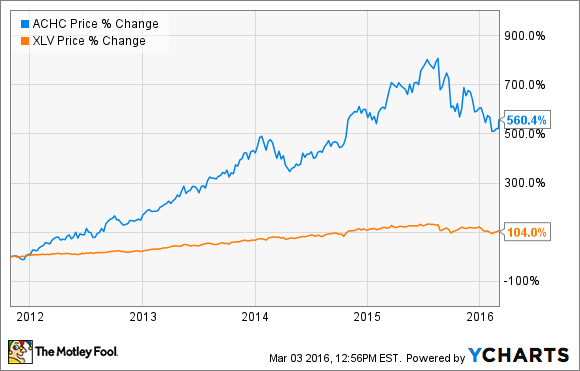 Management expects that the good times will continue in 2016 as it is forecasting adjusted earnings per share for the year to land between $2.81 to $2.86. If achieved, that would represent growth of at least 26% over 2015's results. Longer term, the company is targeting a $6 billion revenue run rate by the end of 2020, which is more than a tripling of the $1.8 billion in total revenue that it produced in 2015.

Companies that choose to grow primarily through acquisitions tend to be riskier than average as integrating acquisitions properly can be extremely challenging. Thus far, Acadia's management team has proven itself to be up to the task, so if it can continue to make smart acquisitions and achieve its longer-term growth targets, then I could easily see its stock once again returning to an upward trajectory.