Please ensure Javascript is enabled for purposes of website accessibility
Log In Help Join The Motley Fool
Free Article Join Over 1 Million Premium Members And Get More In-Depth Stock Guidance and Research
By Matthew DiLallo - Mar 7, 2016 at 9:45AM

Charts every investor in the world’s largest independent refiner should see.

Valero (VLO -0.57%) is coming off a very strong year in 2015. Adjusted net income jumped by more than $1 billion to $4.7 billion thanks to robust demand for gasoline and discounted crude prices. Because of that strong operating environment, Valero's stock surged more than 40% for the year, which was quite a different outcome from that of most other energy stocks. Here are five charts that explain Valero's recent success.

Valero loves low oil prices
Low oil prices aren't good for companies selling oil, but it's great news for those like Valero that need to buy oil in order to process it into gasoline and other fuels. Low oil prices do two things for Valero: They lower its feedstock costs while at the same time fueling stronger demand for petroleum products like gasoline. Last year, for example, gasoline demand in the U.S. grew 2.5% to 9.2 million barrels per day, which was the highest level for demand since 2007. This inverse relationship to the price of oil really shows up in Valero's bottom line: 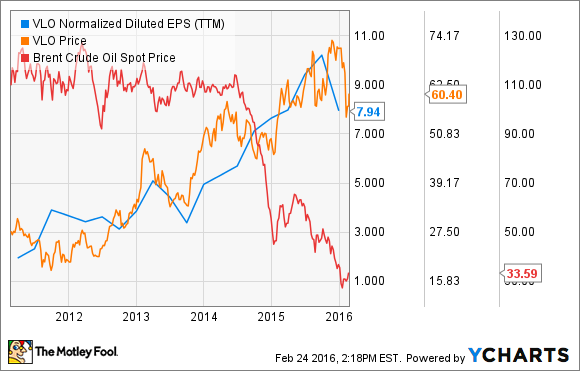 Its dividend keeps going up
Valero has a long history of growing its dividend thanks to its ability to incrementally improve the profitability of its assets. Last year, however, really takes the cake, with Valero growing its payout by 80% over the prior year. Furthermore, it's already off to a great start in 2016, with the dividend up 20% so far this year, continuing its history of growing the payout: 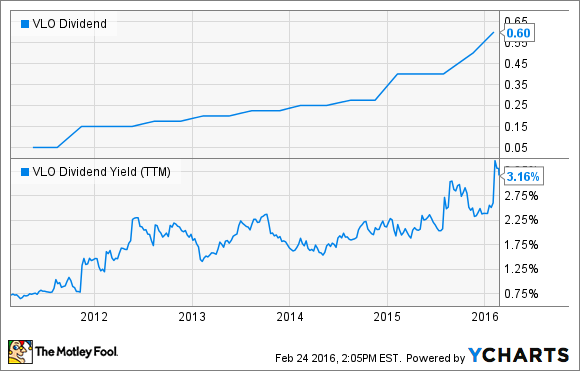 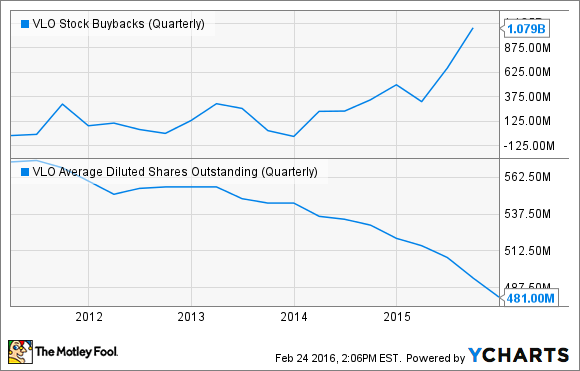 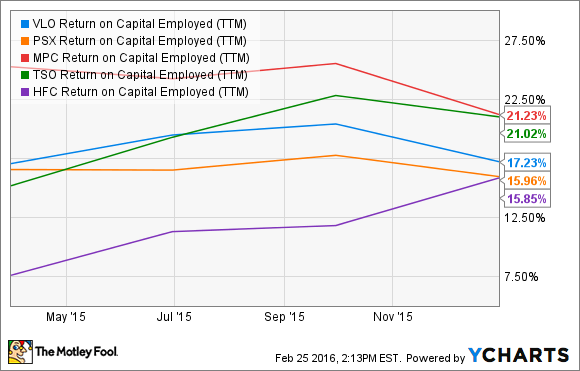 While Valero isn't quite as efficient as Marathon Petroleum (MPC 1.24%) and Tesoro (ANDV), which recently moved past it to take the No. 2 spot in the peer group, it is doing a better job than Holly Frontier (HFC) and Phillips 66 (PSX -0.23%) at effectively employing capital to grow shareholder value. 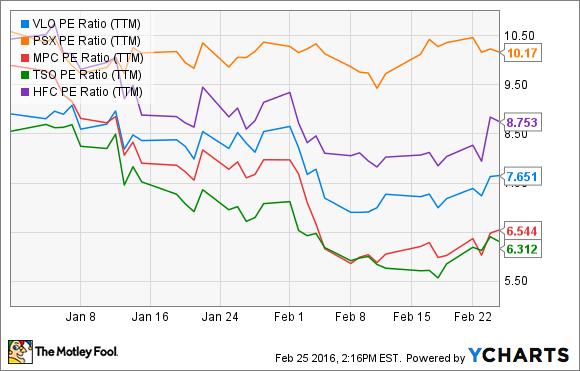 What's interesting to note is that not only do Tesoro and Marathon Petroleum have higher returns on capital employed, but both are cheaper as measured by the P/E ratio. Conversely, Phillips 66 and Holly Frontier have lower returns and a higher valuation. Normally, the opposite would be true, suggesting that there are either problems at Tesoro and Marathon Petroleum leading to their discounted valuation or both are very undervalued. Valero, meanwhile, also appears to be undervalued, at least against the peer group average.

Investor takeaway
From these charts, we learn that Valero loves cheap crude oil because it fuels higher profits, giving it more cash to return to investors and invest back into its business. That said, when it comes to valuation and returns, it's middle of the road. That makes it a pretty solid refining stock, though it might not be the best of the group to buy.