Developing and commercializing new cancer therapies is difficult for any organization. For a company as small Geron Corporation (NASDAQ: GERN), it's nearly impossible. Investors nearly lost all hope a couple of years back, when the FDA put its sole candidate, imetelstat, on hold. Just days after the agency allowed trials to continue, Johnson & Johnson (NYSE: JNJ) recognized an opportunity and inked a collaboration deal with Geron.

Now that Johnson & Johnson's pharmaceutical arm is ready to help with the heavy lifting, first-in-class telomerase inhibitor imetelstat has a chance to go all the way. Let's look at a few upcoming developments that could help Geron's stock rise.

1. IMbark
In addition to giving Geron $35 million upfront for rights to imetelstat, it also agreed to split costs of two initial studies. Furthest along is the phase 2 IMbark trial involving myelofibrosis patients with disease progression following treatment with JAK inhibitors.

A rare blood cancer, myelofibrosis currently affects roughly 13,000 patients in the U.S., and about 3,000 more are diagnosed each year. The prevalence is low enough that the drug has been given an orphan designation, which, in addition to other perks, can lead to partial reimbursement of associated R&D expenses. This gives J&J a relatively inexpensive shot at developing a first-in-class therapy that should stand out from Incyte's JAK inhibitor Jakafi.

Jakafi won approval to treat myelofibrosis in late 2011 and by 2014 generated annual U.S. sales of $358 million from that indication alone, despite its limited population size. In late 2014, Jakafi's label expanded to include the larger polycythemia vera population, and its annual sales rose to $601 million last year.

Geron and J&J began treating patients last September in an open-label study with two imetelstat dosage arms. Success here probably wouldn't be enough to file an application, but it could do wonders for Geron's stock, and soon. In the second half of the year, then again in 2017, J&J is expected to check in on how things are going. If at least one of the dosage arms shows acceptable levels of safety and efficacy, J&J probably will probably take the drug through phase 3 and into commercial stages, triggering some hefty milestone payments for Geron.

2. IMerge
Also in partnership with J&J's Janssen subsidiary, Geron has started a two-part phase 2/3 study named IMerge to investigate imetelstat in patients with myelodysplastic disorders. This is an umbrella term for a diverse group of conditions in which bone marrow fails to produce enough healthy blood cells. Current treatment options involve blood transfusions and erythropoiesis-stimulating agents such as Amgen's Epogen and Aranesp, and J&J's Procrit, all of which all carry black-box warnings, the FDA's most severe. 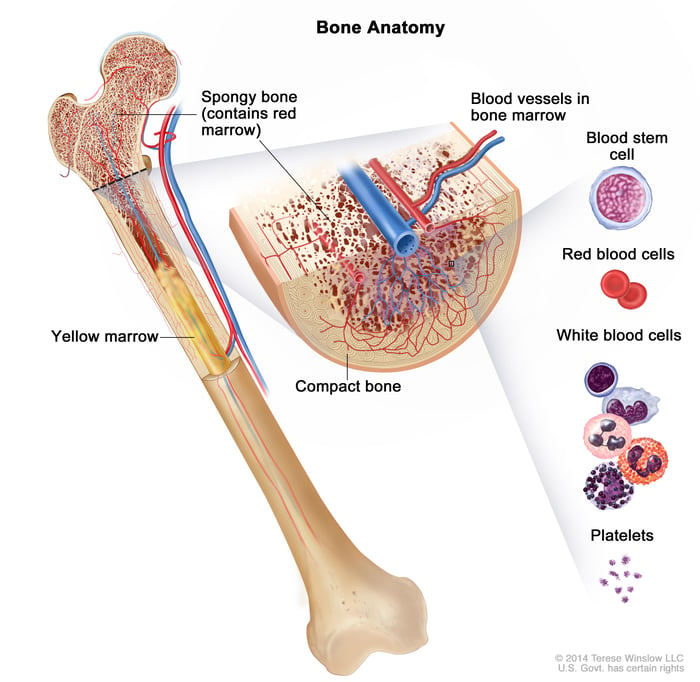 The IMerge trial will test imetelstat in patients who no longer respond adequately to erythropoiesis-stimulating agents. Because myelodysplastic disorders arise from a myriad of issues, it's difficult to predict peak sales for a first-in-class drug such as imetelstat in this diverse population. Combined, Amgen's Epogen and Aranesp racked up $3.8 billion last year, so there's clearly demand. A win in the clinic here would certainly do wonders for Geron's stock.

We'll have a clearer picture of imetelstat's future in this indication soon enough. The partners plan on an internal review in the second half of the year. If the data is promising, they'll continue with a phase 3 trial beginning next year.

3. Continued prudence
Johnson & Johnson's deal was heavily back-loaded, paying just $35 million upfront. If data from the IMbark or IMerge trials inspire J&J to continue the collaboration, the lion's share of the deal's potential value comes into play. Geron even has the option to pick up 20% of development and commercialization costs for a larger cut of potential sales.

With just 19 employees, Geron ought to be able to keep the lights on with the $114 million in cash and short term investments it had on the books at the end of last year while J&J decides if it will take its partnership into the "continuation stage" or walk away.

If J&J walks away, it would be devastating but hardly a total loss for shareholders, as the stock has recently been trading at just over three times its book value. The $35 million received upfront from J&J was recognized last year, and the company posted its first ever profit. It was just $46,000, but a profit nonetheless. With such a slow cash burn rate, if operations suddenly ceased mid-year, investors probably wouldn't suffer a total loss.

With the company's market cap at just $482.6 million, investors opening positions now face a compelling risk-to-reward ratio if J&J can file a new drug application for imetelstat, even if the drug flops in the market. If it succeeds, the gains would be tremendous.

However, if data thrown off from the IMbark or IMerge trials boosts the stock, I'm worried the company will get ahead of itself and raise equity to acquire another candidate. Beyond imetelstat, it has nothing in the pipe.

Instead, what I'd like to see is for Geron to stay patient, let the J&J collaboration play out, and then increase its pipeline with positive cash flows, not equity. The temptation to raise equity will be hard to resist if the price spikes. However, remaining prudent will allow shareholders a larger slice of profits and increase the stock price over the long run.