They're both posting strong growth -- but which would make the better long-term investment?

Booming global demand for sports footwear and apparel is powering sharp growth at both Nike (NKE -0.34%) and Adidas (ADDYY 4.93%). Sales rose by double-digits for each company last year as their profit margins ticked higher.

Today, I'm stacking the two consumer products giants against each other with the aim of determining which is the better bet for investors.

Broadly speaking, the two stocks are valued in lock-step with each other. While Nike is growing slightly faster, investors have to pay a minor premium for that advantage while giving up a higher dividend yield from Adidas. Digging beyond the headline figures reveals a few more differences between these two investments, though.

The brand portfolio -- Advantage Nike
Brand strength is critical in the world of sportswear, which helps explain how Nike has built its business into such a global powerhouse. The Nike and Jordan brands are two of the most powerful franchises in the world; Nike covers the running market, and Jordan owns the basketball segment. This portfolio is further bolstered by the blockbuster properties of Hurley and Converse.

In contrast, Adidas relies almost exclusively on an Adidas brand that is also one of the world's most recognized and iconic. Like Nike, the brand cuts across many sports and product categories. Adidas made up 82% of the company's sales at last count, with Reebok weighing in at 10%. So the deeper brand portfolio makes Nike the winner, here.

Sales growth trends -- Tie
Despite starting from a bigger base, Nike managed to grow faster than Adidas last year while posting broad-based growth. Every geography contributed to its 14% sales uptick, led by North America, followed by Western Europe, and then China and Central and Eastern Europe.

Adidas trailed those figures, but only slightly, thanks to a 30% spike in Western Europe and 8% and 16% jumps in North America and China, respectively. "Our 2015 performance is a picture-perfect example of a successful comeback in sport," CEO Herbert Hainer told investors this month.

The outlook for the year ahead favors Adidas. Management forecast 11% revenue growth for fiscal 2016, compared to the "mid-single digit" gains that Nike is forecasting.

Profit and profitability -- Advantage Adidas
The earnings match-up goes to Adidas. For one, its 48% gross profit margin represents a healthy 0.6 percentage point increase over the prior year. Nike's profitability improved by the exact same range in the past year but is running at a lower 47%. That gap has been persistent for years: 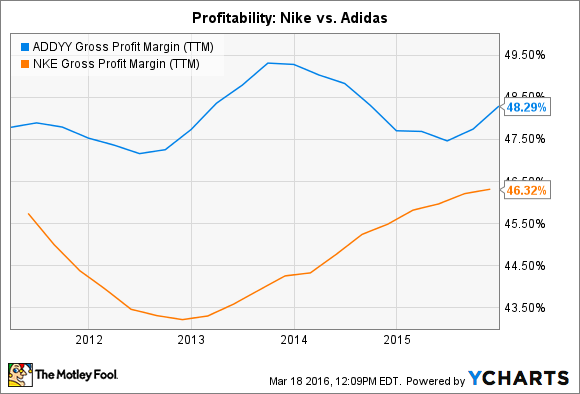 It's only likely to rise in the coming months, too, since Nike is now working its way through excess inventory in the U.S. market. As a result, management sees gross margin declining by 0.5 percentage points before rebounding in the last half of the year to end slightly higher.

Adidas' stock has outperformed Nike's over the last year, rising 31% compared to its rival's 48%. As a result, the two companies have a nearly identical valuation of about 25 times next year's earnings and 31 times the past year's profit.

That suggests investors could be better off buying Nike at these prices. Sure, profit growth might disappoint this year, but its leadership position, its deeper brand portfolio, and its ability to plow more cash into advertising and product innovations point to market-beating earnings improvements over the long term.