If the company can meet some of its internal targets and restore investor confidence -- as well as get a boost in drilling activity from the industry -- then Weatherford International should get back on the right track.

It hasn't been a good couple of years for oil services providers, but things are even worse for Weatherford International (NYSE: WFT) as its been the worst performer of its peer group over that time. 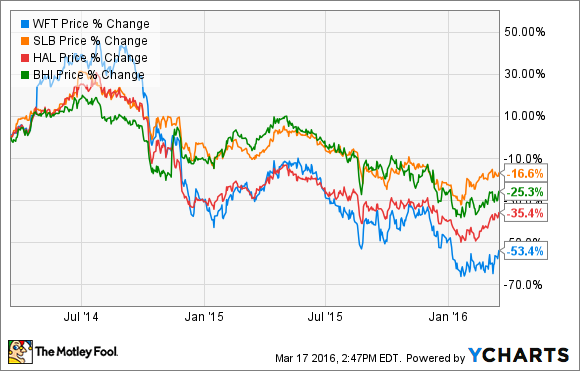 The combination of declining oil prices and the lack of investment in new oil and gas production has led to Weatherford's revenue streams drying up -- and taking its share price with it. While rising oil prices is one reason the company could start to see share prices head back in the right direction again, there are a couple other things worth keeping an eye on as well.

Let's take a look at the three biggest factors that could send Weatherford's shares surging.

Increase in drilling activity, especially in North America
This is pretty much a no-brainer, but as an oil services company, Weatherford's entire destiny is tied to oil producers' willingness to spend money. Today, though, producers would much rather have a root canal than spend any more money on new drilling and service efforts. This is especially true in North America, where land rig counts are at their lowest levels since oil services peer Baker Hughes (BHI) started tracking rig counts, and they could potentially be at their lowest point in 150 years. 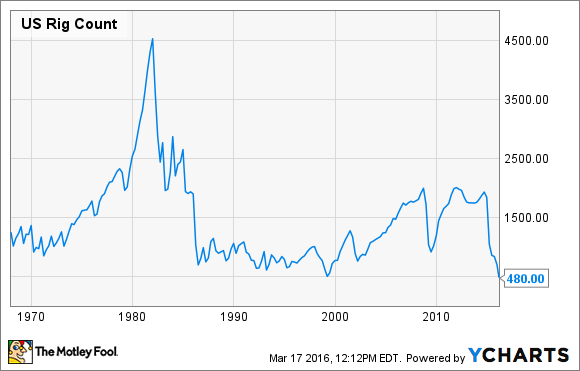 Of all the regions in which Weatherford operates, the U.S. is by far the largest. More than 30% of its workforce is in North America, where it generates one third of its total revenue. So, while a general rise in global activity would be helpful, it's more important for Weatherford that the U.S. market specifically sees a strong rebound.

This may be wishful thinking, at least in 2016. Based on some of capital spending plans that have been released thus far, it's not looking like 2016 will be the year we can expect that. Chevron (CVX -4.44%) -- one of the most active companies in the Gulf of Mexico and the Permian Basin -- expects to reduce its capital spend by 20%-30% compared to 2015 spend levels. So, perhaps we won't see Weatherford's stock tick back up this year, but once we start to see an increase in capital spend dollars, chances are, Weatherford's stock will go with it.

This year, though, the company has even more ambitious plans for increasing cash flow. Duroc-Danner has stated that the company intends to generate $600 million in free cash flow this year. The general thesis is that the company will be able to curtail its capital expenditures as well as halt its "one time charges," which have totaled more than $600 million over the past three years. 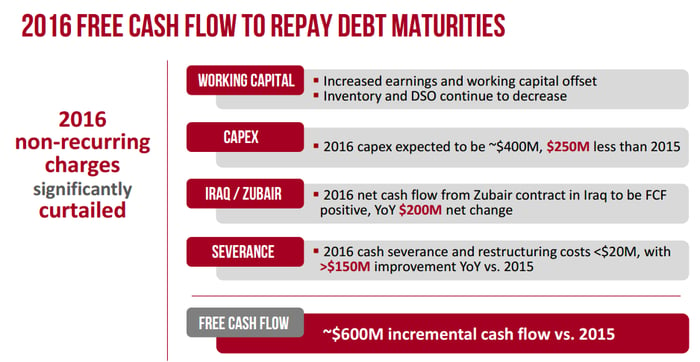 Granted, a lot of this plan was built before we got a good look at oil producers' capital spending budgets, and with lower spend levels across the board, it will extremely difficult to meet these targets. Any number that resembles a strong free cash flow conversion rate, though, could signal that the company finally has finally its spending issues under control and could make for a more lucrative investment.

Cleaning up its debt situation
There's no nice way of putting it: Weatherford is under a mountain of debt that needs to be addressed. When you see how much debt the company carries compared to its peers, its easy to see why it hasn't been able to generate comparable returns.

In fact, the situation has become so onerous that Moody's has downgraded Weatherford's credit rating twice in the past five months, and it expects further credit downgrades if the company doesn't shore up its balance sheet.

As the investor presentation slide above mentions, the company plans on using free cash flow from this year and the coming years to pay down debt, especially since there is a decent portion of that debt coming due between now and 2020. 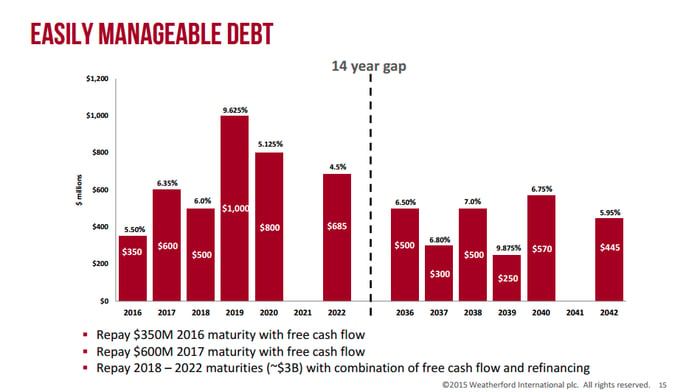 On top of its efforts to pay down debt with cash flow, the company has recently raised more than $500 million in newly issued equity. Chances are, a decent portion of that will be used to pay down part of the $600 million in debt maturities coming due this year.

The next year or so will be challenging, but if the Weatherford can get out from underneath this debt load and bring its balance sheet in line with its peers, investors will likely show more confidence in the company and lead it to higher share prices.

What a Fool believes
If the company were able to start bringing in higher levels of free cash flow thanks to better cost controls and some increased drilling activity, that could help get its debt load under control and give shares a long-needed boost. At the same time, there are a lot of "ifs" in that statement, and some of them are largely out of Weatherford's control. In the interim, the company needs to control its costs and find ways to manage its debt payments like its recent share issuance.

It may take a while, but once these three things start to happen, investors can expect to see shares rise.