The industrial sector had a tough time of things in 2015, and 2016 is looking like it will be another bad year. But despite the difficult backdrop, companies such as Eaton Corporation (NYSE:ETN), Emerson Electric Co. (NYSE:EMR), and United Technologies Corporation (NYSE:RTX) are still wildly profitable. Add in solid dividends and long operating histories, and these three companies remain bargains even after a recent price pop.

Things were bad
Eaton's organic sales fell 2% last year, with a much larger 4% decline in the fourth quarter. Emerson's fiscal 2015 organic sales dropped 2%, too. United Technologies was the standout performer here, with a "massive" 1% increase in organic sales -- not exactly a number to write home about. No wonder that each of these companies is about 20% off of their highs reached just a few years ago.

And 2016 isn't looking like it will be much better. For example, Eaton is calling for organic growth to drop by as much as 4%, Emerson thinks organic sales could fall 5%. United Technologies, once again, is the standout, expecting the worst case scenario to be a flat top line. So, at this point, it looks like this trio is heading into another tough year.

This year won't be good either, but...
Here's the thing, though, bad is kind of relative here. Eaton, Emerson, and United Technologies are all industrial companies that make things to support businesses around the globe, from energy controls to elevators. The world doesn't work without what they sell. So demand may ebb and flow, but only a massive global economic downturn would be a truly worrisome event.

Moreover, each of these companies has been around for a while, so they've lived through tough patches before. Emerson traces its roots back to 1890, Eaton took shape in the early 1900s, and United Technologies incorporated in the 1930s. The business at each company has changed and shifted over time as customer demand and technology changed.

Which helps explain why each has taken actions to deal with the current environment. For example, Eaton, Emerson, and United Technologies all have restructuring plans in place to pull costs out of their business. United Technologies even sold its famous Sikorsky helicopter division so it could refocus around businesses it thinks have better long-term prospects. Emerson, meanwhile, is planning on spinning off a division, network power, that isn't expected to grow fast enough to remain a part of the Emerson family. In other words, the companies are working to control the things they can control. 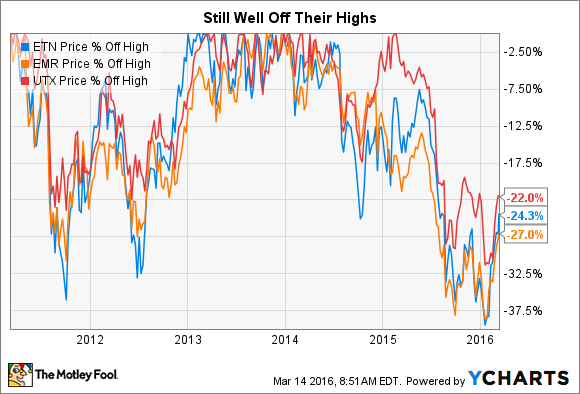 And they each look like a decent value today, particularly for income investors. For example, each increased their dividend last year and all three have seen their yields spike to levels seen in the 2007 to 2009 recession. Even after a recent rebound in the shares, the yields of each remain above their five year averages.

Worth a bit of risk
Yes, each of these industrial giants has been dealing with a bad market. But they've been doing so pretty successfully and 2016 is likely to be no different. If you are willing to take a bit of a contrarian bent, that could make the stocks, which are still well off their recent highs, a good value today.

Add in that Eaton's yield is nearly 3.8%, Emerson's is about 3.7%, and United Technologies' is spitting out around 2.7% (that's the lowest of the group, but about 15% higher than the company's five year average), and you are getting paid to wait for better days. Clearly, Eaton and Emerson will be more pleasing to income investors, but all three are still very interesting investment opportunities that, despite a recent run up, continue to be three great stocks you can buy on sale.