Stocks traded solidly higher throughout the day Wednesday. By the closing bell, the Dow Jones Industrial Average (DJINDICES:^DJI) added 84 points, or 0.5%, and the S&P 500 (SNPINDEX:^GSPC) gained 9 points, or 0.4%. 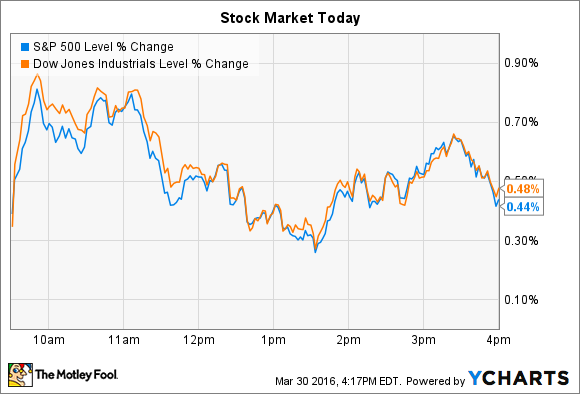 In economic news, the monthly ADP employment report out today indicated that the economy added 200,000 private sector jobs in March, right in line with the healthy pace of the last few months. "The job market continues on its amazing streak," of over four years of strong growth, economist Mark Zandi was quoted as saying. The official jobs report from the U.S. Department of Labor will be released on Friday, and is expected to show 200,000 jobs added as the unemployment rate holds steady at 4.9%.

Lululemon's healthy holiday demand
Yoga-inspired apparel specialist Lululemon spiked 11% higher today after posting surprisingly strong fourth-quarter results. Sales for the critical holiday period rose 17% to $704 million, edging past management's recently raised guidance of $690 million to $695 million. That translated into $0.85 per share of earnings, which was a 9% improvement over the prior year and also solidly above executives' plan. "I'm very pleased with our strong finish to the year with positive momentum across all our channels," CEO Laurent Potdevin said in a press release.

Comparable-store sales growth of 11% marked an acceleration over the prior quarter's 9% gain, and the healthy uptick was powered by a mix of increased brick-and-mortar store sales (up 5%) and sharply higher e-commerce business (up 33%). Online sales now account for 21% of Lululemon's revenue, up from 19% a year ago.

Profitability fell again this quarter, with gross margin slipping to 50% of sales from the prior year's 51.5% mark. But the 1.5-percentage-point decline was half of the drop that Lulu endured in the prior quarter, which suggests that the company may have finally worked through its inventory overhang.

Potdevin and his executive team forecast sales of about $2.3 billion for the new fiscal year, up 12% over 2015's result. Earnings should come in at $2.10 per share, the company said, or 11% better year over year.

Carnival's busy summer
Cruise ship giant Carnival saw its stock rise 5% to cross $50 per share for the first time since January as investors cheered the company's sharply improving business fundamentals and outlook. Sales rose to $3.7 billion while earnings improved to $0.39 per share, and both the top- and bottom-line figures beat consensus estimates.

Carnival benefited from a huge jump in guest spending as daily average revenue yield jumped 6%, compared to management's December guidance targeting 4% growth. "Our teams delivered another strong quarter of operational improvement by creating increased demand for our brands and leveraging our scale," CEO Arnold Donald said in a press release.

For the rest of the 2016 fiscal year, Carnival sees profitability continuing to increase as net revenue yield growth outpaces cruise cost growth. The company plans to generate 44% higher earnings next quarter, or $0.36 per share at the midpoint of guidance.

Bookings for the rest of the year are "well ahead" of the prior year, executives said -- and at higher prices -- which bodes well for the business heading into peak summer travel season.