The price was steep, but Alaska Air won the bidding for the trendy California-based airline.

Last week, numerous sources confirmed that Alaska Air (ALK -0.30%) and JetBlue Airways (JBLU -4.27%) were competing to buy chic Bay Area-based airline Virgin America (VA). Negotiations heated up over the weekend, with Alaska and JetBlue quickly bidding up the price, according to The Wall Street Journal.

Ultimately, JetBlue backed down. On Monday morning, Alaska Air announced plans to acquire Virgin America for $57 per share, or roughly $2.6 billion. Including the value of Virgin America's debt and capitalized operating leases, the total deal value comes out to roughly $4 billion.

Let's take a look at why Alaska Air decided to pull the trigger and whether it was a good idea.

Becoming the premier West Coast carrier
Alaska and Virgin America both focus their operations on the West Coast. Alaska has a big hub in Seattle, along with smaller hubs in Portland, Anchorage, and Los Angeles. Meanwhile, Virgin America -- which is barely a quarter of Alaska's size by revenue -- operates most of its flights from bases in San Francisco and Los Angeles.

Thus, combining the two airlines will create a West Coast powerhouse, with a big presence in nearly every major market up and down the coast. This could help Alaska Air compete for more corporate contracts.

For example, many tech firms have offices in Seattle as well as Los Angeles and San Francisco. By offering numerous flights in each of those markets, Alaska Air would be able to cover a larger proportion of those companies' travel needs.

Buying Virgin America will also give Alaska more access to slot-controlled airports on the East Coast, including all three New York-area airports and Reagan National Airport just outside Washington, D.C. On the West Coast, Alaska will get access to more gates in San Francisco and Los Angeles, two airports where gate space is scarce.

Longer term, Alaska also sees California as key to its future growth. The company already holds about 50% market share in the Pacific Northwest. By contrast, it has just 7% market share in California, which is also a much bigger market. Buying Virgin America will give Alaska a platform to expand there, allowing for faster growth than an organic growth strategy.

Cost synergies are significant, too
Combining Alaska Air and Virgin America will also lead to meaningful cost synergies. First, Alaska has a much higher credit rating than Virgin America. In the long run, this should allow it to finance aircraft purchases at a lower cost.

Furthermore, outside of the West Coast, Alaska and Virgin America operate at many airports where they each have just a few flights a day. As a single airline, they would gain more scale, leading to lower costs.

Did Alaska overpay?
At $57 per share, Alaska Air is paying a steep premium for Virgin America, more than twice the latter's share price from early February. 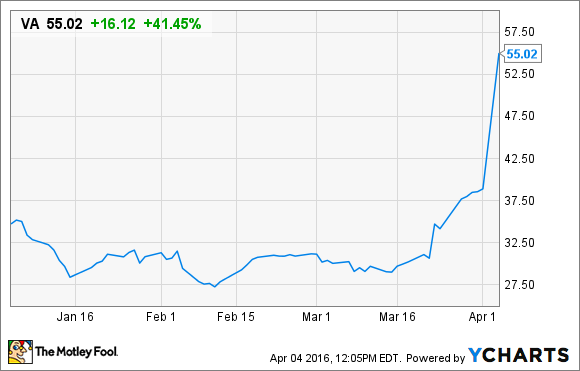 However, Alaska needed to pay a hefty premium to outbid JetBlue Airways. Combining Virgin America with JetBlue would have made a lot of sense, even more so than an Alaska-Virgin America merger, in my opinion. Virgin America and JetBlue are similarly positioned in the market, they have similar fleets, and Virgin America's West Coast footprint would have been a great complement to JetBlue's strength on the East Coast.

Nevertheless, Alaska Air expects the merger to produce $175 million in annual revenue synergies and $50 million in annual cost synergies by 2020. The net effect will be to preserve Alaska's industry-leading profit margin while increasing its revenue and growth potential. In addition, despite the takeover premium, Alaska is buying Virgin America for just 16 times the latter's projected 2016 earnings.

Alaska's management will have its work cut out to integrate the two airlines and figure out how to keep Virgin America fans loyal to the combined airline. But in the long run, this merger is likely to justify the steep price for Alaska Air shareholders.