Now that it's mostly recovered from this year's biotech meltdown, you might be tempted to let this one go. Here's why you should think twice before you do.

Long-term shareholders of bioprocessing kingpin Repligen Corporation (RGEN -0.07%) watched with glee as their shares increased about 1,000% over the five-year period ending last summer. Then the stock came crashing down along with shares of the drugmakers that rely on its products.

Now that it's recovered somewhat, jittery investors might be tempted to sell off their Repligen shares. With the stock trading at about 97 times trailing earnings, now certainly seems like a good time to click that "sell" button. Before you do, give me a few minutes to convince you this stock is worth holding for many more years.

A brief recap of operations
Repligen has led the global protein A ligand market for years. This reagent is crucial to the manufacture of monoclonal antibodies such as AbbVie's Humira and Remicade from Johnson & Johnson. With manufacturing facilities in both the U.S. and Sweden, most of the world's commercial, and experimental, biologic drugs involve Repligen's products.

In fact, the company boasts that 20 of the top 25 drugmakers use products Repligen manufactured. A big reason the stock is so popular is the steady expansion of the company's product line to meet more of its customers' needs. Protein A ligands have gone from roughly two-thirds of 2012 product sales of $42 million, to just over half of last year's product sales of $83.5 million.

In transition
I'll admit, it's hard to see how this (or any) company can support such a multiple. Looking forward, Repligen is expecting net income of about $16 million this year. Reaching that estimate should result in earnings of about $0.42 per share this year, an increase of 50% over earnings of $0.28 per share reported last year.

On this forward-looking basis, the shares are still trading at a pretty high multiple of about 65 times forward earnings. At least we're at a low enough altitude to put away our oxygen masks, but growth over the past few years isn't terribly inspiring, either. At first glance, it's downright lousy. 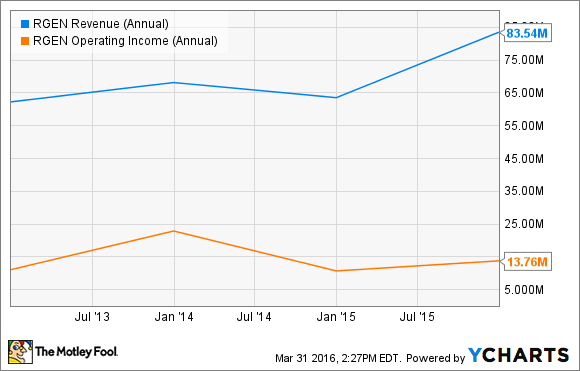 However, this is because the company is in something of a transitional period. One that's proceeding quite well.

Focus on product growth
In its earlier days Repligen dabbled in drug development but never commercialized any compounds. Rather, it licensed them and collected royalties. In 2013 it collected $20.6 million in royalties, mainly from sales of Orencia from Bristol-Myers Squibb.

Those royalties have since evaporated, and Repligen is out of the drug-development arena. As part of its transition, president, CEO, and board member Walter Herlihy is no longer with the company.

The company's new CEO, Tony Hunt, joined the company as chief operating officer in 2014. Since then, growth of the company's product offerings, sales, and margins has been remarkable. Last year, gross profit increased 49% to $48.3 million. On a GAAP basis, operating income rose 29% to $13.8 million.

Official growth of annual operating income last year is impressive on its own, but on an adjusted basis it's stunning. After excluding costs associated with acquiring Refine Technology -- along with its best-in-class device that boosts efficiency of biologic manufacturing -- and previous gains from non-product revenue, annual operating income surged 71% last year to $17.8 million.

Well positioned to ride a sticky trend
The best thing about Repligen's business model is the "sticky" customer relationships it has. As one example, it's supplied GE Healthcare with Protein A affinity ligands for over 15 years and recently extended its supply agreement through 2019 for products manufactured in Sweden and in the U.S. through 2021.

While keeping existing customers is key, it's also well positioned geographically to pick up new ones. Last February, it relocated its recently acquired Alternating Tangential Flow System to its Massachusetts facility, and it's even developing single-use versions for new biologic -- and biosimilar -- development. Located in Waltham, just a few miles from Cambridge, it's right next to arguably the highest concentration of scientists requiring such facilities. Clearly, it wants to be there for companies from early stage development and throughout commercialization.

A large part of FDA biologic license applications pertain to manufacturing site compliance. Once you've won approval for a biologic, or biosimilar, manufactured at a particular facility, you can't just switch to another without jumping over tedious, and costly regulatory hurdles. These "switching costs" give Repligen a degree of pricing power.

As Repligen increases its already large economies of scale, it should be able to enjoy profit margins at prices would-be competitors can't match. That's what Warren Buffett calls a wide economic moat. That's also why you might want to think twice before letting go of your Repligen shares.