Ferrellgas is in a shrinking industry, but that doesn't mean it can't find a way to swim.

Ferrellgas Partners, L.P. (FGP) operates in an industry that's slowly shrinking. On one hand, that's bad news. But on the other there's quite a bit of opportunity hidden under that negative. And Ferrellgas has just broadened its business, too, so it has a second opportunity to ensure it manages to swim where others are sinking -- just as it has for years now.

Propane: the forgotten fuel
A backyard barbecue probably comes to mind when you think of propane. As it should, but propane is also used to dry crops, power equipment, and heat homes that are in remote locations. Even though it's used in more ways than many people realize, the fuel is still slowly being replaced by other options. For example, fuel cell technology is increasingly being used to power forklifts in warehouses, a one-time stronghold for propane. And as gas pipelines are built out, more homes can switch to the fuel and leave propane behind. 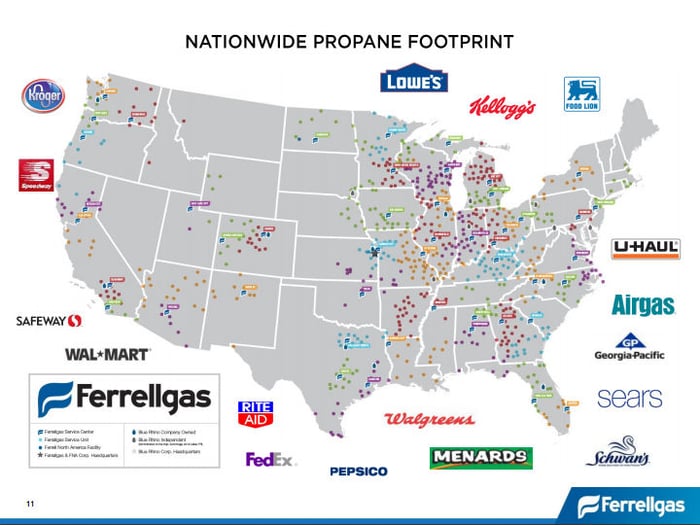 But, somehow, Ferrellgas has managed to stay in business for more than 75 years. And it's paid at least $2.00 a unit in distributions for well over a decade. How has a company in a slowly declining industry done that? By acquiring over 200 competitors, mostly mom-and-pop shops, since 1986. Essentially, Ferrellgas is one of a handful of companies that is "rolling up" the propane industry.

And sometimes the opportunities are pretty big. For example, competitor Suburban Propane (SPH 2.40%) roughly doubled in size when it bought the propane assets of Inergy in 2012. That was a large transaction, but there's still plenty of room for deals. According to AmeriGas partners (APU), another of the industry's giants, the top 10 players in the propane market have a roughly 40% market share.

So Ferrellgas can buy some large names in the top 10 or target the other 60% or so of the market that's controlled by smaller companies, often mom-and-pop shops. Either way, it can keep growing its business the same way it always has, by acquisition.

Branching out
But that's not all Ferrellgas has up its sleeve. In 2015 the partnership bought Bridger Logistics, a midstream oil and gas company. Today Ferrellgas owns pipelines, terminals, trucks, rail cars, and even tanker ships, all of which are used to transport oil and natural gas, largely on a fee-based basis, from some of the most important drilling regions in the United States, to the end markets where they're put to use. 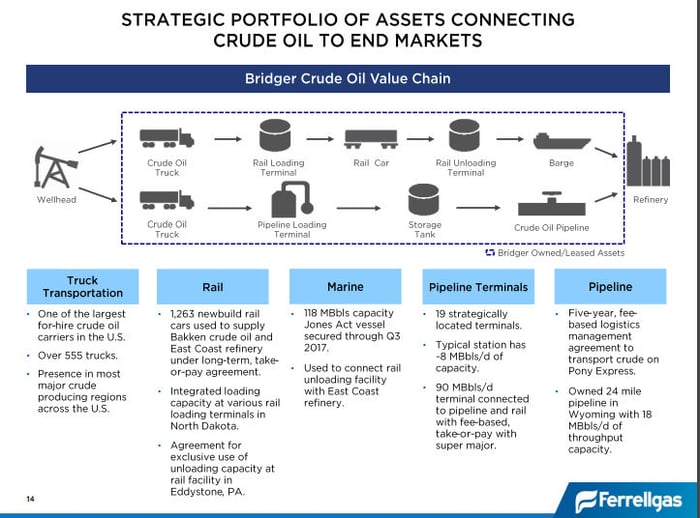 Ferrellgas is there every step of the way. Image source: Ferrellgas Partners.

The midstream business makes up around 25% of Ferrellgas' earnings before interest, taxes, depreciation, and amortization. That's up from zero in 2014, so the partnership has acted quickly to add a new growth engine to the fold. It also shows that the partnership can make bold moves when it wants to.

That said, the timing of this purchase could turn out to be problematic. Indeed, natural gas prices have been moribund for several years, and oil has been in a general downtrend since mid 2014, despite recent strength. While that may hold the company back over the near term, it could mean more opportunities over the long term. Cheap fuel could very well lead to increased demand, particularly for natural gas, which is quickly displacing coal in the electricity industry.

Opportunities could include acquisitions, an area where Ferrellgas has a proven track record, as well as expansion of existing assets, if needed. And while the news is filled with an increasing list of oil industry meltdowns, Ferrellgas has many key partners that are household names, such as Royal Dutch Shell and Occidental Petroleum. Although every customer isn't in the top echelon of the energy industry, Ferrellgas has a broad customer list that should survive the downturn in stride.

In fact, the company recently increased its distribution from $2.00 a unit per year to $2.05. That may not sound like a big deal, but it's the first distribution increase in Ferrellgas' history. Essentially, the partnership thinks the Bridger deal is going to be a good thing over the long term, and it plans on rewarding unitholders along the way.

With the energy industry in a downturn, this strategic business shift could be seen as a risk. In fact, if it doesn't work out as planned, it could lead to a sinking feeling for unitholders. However, if it proves as beneficial as management expects, it will help Ferrellgas swim, not just today but well into the future, perhaps even if propane growth starts to become more difficult to achieve as industry consolidation runs its course.

Two arms pulling
So it looks like Ferrellgas has a couple of things going for it. First, it's one of the largest players in propane, allowing it to be a key industry consolidator. Second, it's branching out into the midstream space, which provides it another revenue source today and, potentially, longer-term growth opportunities. If all works out as planned, Ferrellgas will swim solidly forward with two arms pulling it through the water. Keep a close eye on the distribution -- a second increase would be a clear statement that everything is going as projected.