Please ensure Javascript is enabled for purposes of website accessibility
Log In Help Join The Motley Fool
Free Article Join Over 1 Million Premium Members And Get More In-Depth Stock Guidance and Research
By Tyler Crowe - Apr 24, 2016 at 10:50AM

By suspending its distribution recently, Calumet has reduced some of the risk related to its stock. It's still got a long way to go, though.

The energy sector can be a pretty risky space. With no company really in control of where oil and gas prices go, every player in the industry is subject to the whims of prices. Oil refiners such as Calumet Specialty Products Partners (CLMT 2.34%) are traditionally a lower-risk investment in energy. If we look specifically into the numbers at Calumet, though, there are a lot of risks that should cause investors to take heed when looking at the company's stock. Let's look at Calumet's business and see why this refiner is one of the riskier investments today.

Slightly less risky than it was a couple of weeks ago ...
Calumet Specialty Products is an interesting case. On one hand, it occupies a very small niche in the oil refining industry because it focuses on the less common petroleum products outside gasoline and diesel. Sure, it does manufacture fuel just as other refiners do, but the percentage of those products is much lower than all of its publicly traded peers. These specialty products are traditionally a higher-margin product, and the company's refinery locations suggest that it should have access to cheap crude oil from places where takeaway capacity is limited.

On the other hand, Calumet put itself in a bind, both financially and through its payout policy that made it extremely difficult to meet its financial obligations. Between 2011 and 2014, the company made $1.27 billion in acquisitions that led to a blowout on the balance sheet. As of the most recent quarter, the company's net debt to EBITDA ratio was 5.8, which is quite high for both a refiner and a master limited partnership. What makes this figure even more troubling is that 2015 was one of the best times in recent history to be in the refining business. Cheap crude oil meant cheap feedstock supplies. Yet even with a favorable operating environment, Calumet's balance sheet looked notably bloated. 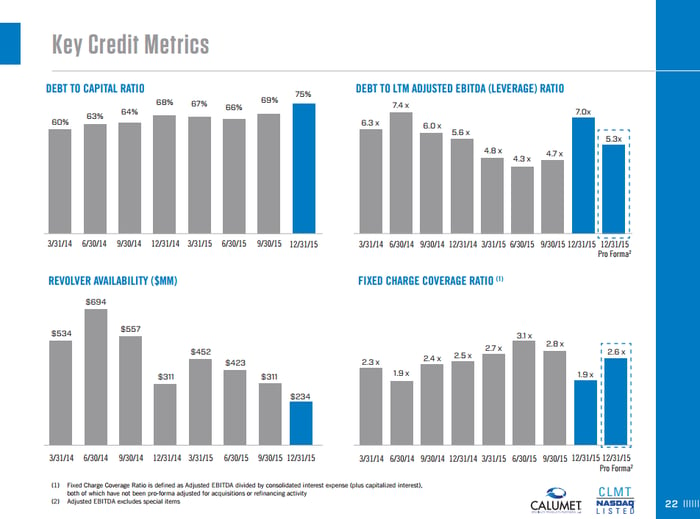 On top of this sizable debt load was the overly generous distribution payment, which was far from sustainable. In all of 2013, the company's distributable cash flow covered only 10% of the company's payout level, and it was only able to cover its entire payment in 2015 thanks to the favorable refining environment. If the market were to deteriorate at all, that payment would have been unsustainable.

These factors are the reason the company's board decided to suspend the distribution on April 15. The strategic rationale was that the company needed to use the cash to get through what it called a volatile operating environment and a need for more liquidity, but the truth is that the company had painted itself into a corner with large debt obligations and a payout it didn't have the cash-generating ability to support without immense help from oil and gas prices.

... and still pretty risky today
. At the same time the distribution was announced, the company said it was adding another $400 million in debt. This move will put long-term debt at $2 billion, which is greater than the value of all the company's tangible assets. Not a great position to be in. Also, that $400 million in new notes carries an 11% interest rate. Raising debt at these kinds of interest rates is going to make it difficult to pay everything back, and it's going to make those credit metrics look even more troubling for some time.

By suspending the distribution, Calumet is going to be able to free up about $200 million annually in cash obligations that can be put to use in other parts of the business. That will help, but it may not be the panacea the company needs. Ultimately, the company needs to improve its cost structure such that it can generate greater returns from its facilities and use it to clear some of this debt from the books before it can start to give money back to shareholders.

What a Fool believes
CEO Timothy Go has been at the helm for only a few months, but he has at least so far shown that he has a vision to improve the company's profitability and is willing to take drastic steps like suspending the distribution to clean up the balance sheet. But Calumet is going to need to execute on that plan and drastically improve its standing with creditors before it becomes a stock without massive risk. From an investor's standpoint, Calumet's stock has dropped about 80% over the past five years and looks much cheaper than it did before, but that doesn't mean risk at the company has been significantly reduced. Until we start to see better operational performance and a stronger financial standing, this one still has "stay" away written all over it.